I was at an estate sale today and there were two huge flat belt machines that are destined for the scrapper if not sold tomorrow. One is a Kempsmith #2 Plain Horizontal mill and the second is a very nice looking but grungy Walcott lathe. I did not have time to find a model number but it is as long as my armspan, which is about 6 feet. I took a quick look on Vintage Machinery and it may be 15" by 6 feet. Includes 4 jaw, steady rest, tailstock and taper attachment. Double v ways. $600 for the lathe and $500 for mill. Tomorrow is 50% day. I bought a Keller powered hack saw for $20. I may go back tomorrow and cannibalize usable parts from the lathe that I can carry. Call me if interested and I can possibly help in some way. Here is the link to the sale. 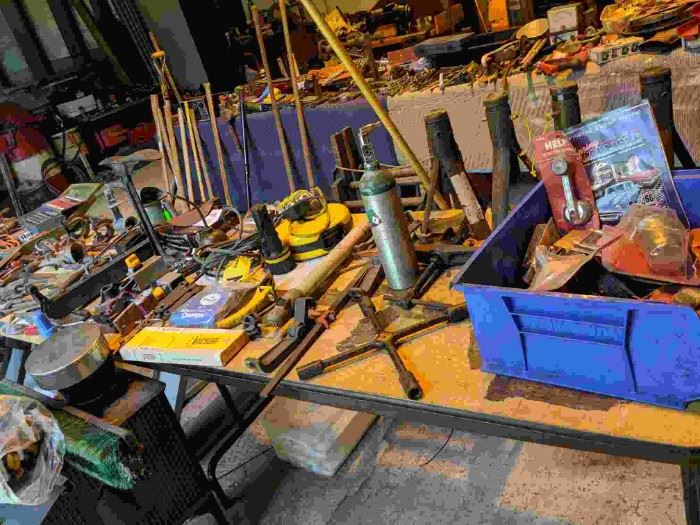 View information about this sale in Davidsonville, MD. The sale starts Friday, July 19 and runs through Sunday, July 21. It is being run by Any Estate Liquidation By Judy.

markba633csi said:
Temper your enthusiasm until you are sure there's something good under all that grunge
Click to expand...

Sad part, is many folks look at all that Iron, and think they will get the price of gold at a scrap yard. Most places will just give you the price of steel, unless you have all the cast iron separated. I just looked it up, steel is 3 cents a pound,, and cast iron is 6 cents. So 1000 lbs, is $30, or $60.
D

Superburban said:
Sad part, is many folks look at all that Iron, and think they will get the price of gold at a scrap yard. Most places will just give you the price of steel, unless you have all the cast iron separated. I just looked it up, steel is 3 cents a pound,, and cast iron is 6 cents. So 1000 lbs, is $30, or $60.
Click to expand...

It may be dirty and worn but they just don't make machines like this any more. And this one looks complete. Grungy but complete. I have a tough time letting it go to scrap and becoming a Kia or soup can.

I agree. Especially right now, with scrap prices so low. Last time I was at the local scrap yard, they had a sign, for steel and iron, they have a 1000lbs minimum. I asked the scale attendant what they meant, he said they will take loads of less, but will not pay anything. Then I asked him how many turn around, and leave, he replied very few, definitely less then 2 in 10. But, their yard is nearly empty, indicating they are selling it rather then waiting on prices to go up. So I take it they do not expect the prices to go up any time soon.

about 15 years ago, I walked to work, and passed a small machine shop, everyday, that was going out of business. I inquired about any smaller and hand type tools. He sold all the big machines to a used tool dealer. He decided to scrap everything else, rather then sell it. He got the local scrap yard to drop off a big dumpster, and he was told he could mix iron, steel, carbide, ect. So that what he did. Several days after the dumpster disappeared, I asked how he made out (I just could not picture the scrap yard separating all the types of metal). That day he got the invoice in the mail. After subtracting the drop off, pickup, and rental for the dumpster, they said he owed them $15. Which they kindly said they would waive. They gave him the mixed steel price, which was even lower then plain steel.

If you talk to them again, estimate the weight with them, and have them look up the price of scrap. Offer them a bit more, and point out they do not have to haul it to the scrap yard.

A few years ago, I looked at a sliding gap lathe. Going by the sellers estimate of the weight, and the price of cast iron, we cam up with under $300. I offered him $600. He turned me down, saying he knows the boss at the scrap yard, and that they give a lot more for "Old Cast Iron". I never heard back, but still wonder how he made out.
Last edited: Jul 20, 2019

Dan , do they have a forklift on site ?
D

Dave, not that I saw. I just got off the phone with my new buddy from the Tuckahoe steam and gas machine shop. He said if I bought it they would help me move it. He/they have equipment.

Doesn't look like a bad lathe at all , but you can bet your a$$ that has some weight to it !

That's not too bad . Looks heavier than that , but lighter than a BP .

OK, so I called the auction folks and they are having round 2 on 8/2 through 4. The lathe is still there and only $200, which is just about what I calculated scrap value to be based on weight and current price range. I even have a way to get it home. How can I not at least buy it and try to find an owner or part it out? I know another Walcott owner who I know wants some of the parts. Also have my eye on a Racine power hacksaw to put next to my Keller.

That's a big machine to move just to part it out !

I'm still on the prowl to clean out the basement with that 9" Jet lathe and WM mill from last year . There was a lot of excellent tooling but it's work . I'm not sure if it's even worth my time to take it on .
D

Dave, the good news is that my contact at Tuckahoe said they would help me move it and if I didn't want it they would take it to sell and make $$ for the museum. So if I can't sell it I can give it to them.

You can at least be glad saving them from China getting them. Down the road you know the ones who own these will want parts and according to eBay there made of gold and platinum as parts. With help there not hard to move if you use your head . Pipe rollers comalong, straps and chain . Good pry bars as levers and blocks. Good luck be safe
D

Silverbullet, a buddy has all the stuff to move the lathe. He leads the team of volunteers at the local steam and gas machine shop museum where I just started volunteering, so he has moving experience.
D

Lathe was sold. Only the Kempsmith #2 remains but it weighs about 3,500 lbs. Just glad the lathe was saved.
You must log in or register to reply here.
Share:
Facebook Twitter Reddit Pinterest Tumblr WhatsApp Email Link
It can take up to an hour for ads to appear on the page. See our code implementation guide for more details. If you already have Auto ad code on your pages there's no need to replace it with this code
Top
AdBlock Detected