Much of the reason for being on this site is due to building these two cars. One is a carbon-shell "Mini" with a mid-mounted Honda Prelude drivetrain, and the other is a "Lotus Seven" with a mid-mounted turbo Honda K24. Weight is about 1700 lbs, and hp is 400-540, depending how it's measured:

How about some pictures of your build. I seriously considered building a Locost 7 but ultimately decided it was too big of a project for me. Instead I went for a 1966 MG Midget that I drug out of a field and have been slowly resurrecting it. I have swapped in a Toyota 3TC engine and 5 speed. The engine is in and I am finishing up all of the details to make it work. 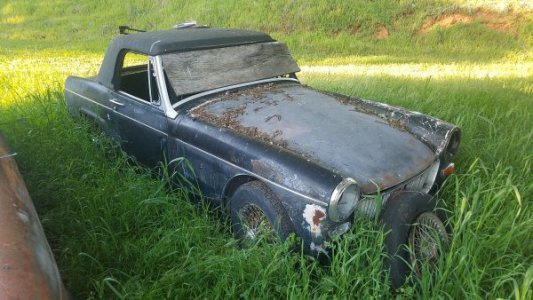 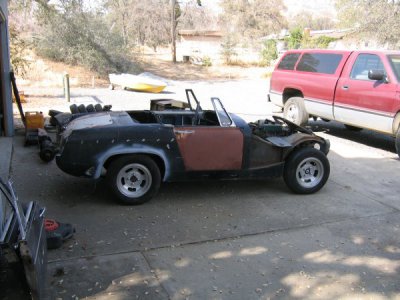 I'll take some more pictures this week and post them.

I have endless (probably 1000s) of pictures, hence the links instead of filling up these pages, but here's one of each: 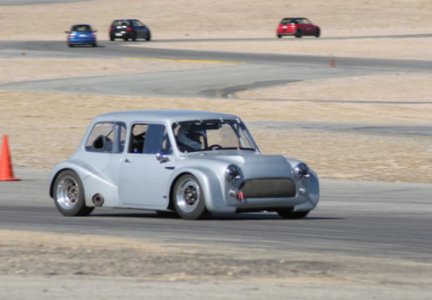 It sounds like a couple of really cool projects! I would enjoy looking at how you made the FWD engine / transaxle work in the rear of the car... but after surfing around your sites for about 15 minutes I found it kind of hard to find pictures of the chasis build. There was lots of text but I could never zero in on the chasis build and the build pictures. Is the transaxle an automatic or a stick?

I love the look of your cars... especially the Midlana! Is the Midlana street legal?

You have to go back toward the beginning of both diaries to see the chassis build.

As far as adapting the FWD drivetrain, keep in mind that moving it to the back doesn't change anything. "Forward" to the engine is still "forward" to the car, so other than changing the shift cables to run up front, everything's the same.

Both transmissions were the stock Honda part, at least for Kimini. Because of Midlana's turbo power, the transmission was heavily reworked with semi-helical gears.

Everyone *****es about California, but interestingly, it's very easy to register a scratch-built car here. This is thanks to some senator years ago gettting screwed on getting his Cobra kit car registered, so presto, a new exemption law for scratch built cars.
L

I read the linked header build. Are you sure that wasn't me trying to weld SS?

My plan was to build a LoCost about 16 years ago.

Somehow I convinced myself (and wife) to open a racing go-kart business. I should have built the car and kept my day job....

Beautiful cars, wish I still had my TR4, or the Honda Civic ITC racer....
M

The Midlana is a beautiful car. I really like the styling. Matthewsx many moons ago I raced go karts in So Cal. It was fun. I had an emmick (sp??) that I raced in the sit up enduro classes. I forget what the motor was. It wasn't a Yamaha. Raced at places like willow springs and riverside raceway.

Thanks. I always wanted a turbocharged car at least once in my life, just to see what all the fuss was about. Well, Kimini, with its dead-stock Honda Prelude drivetrain, was dead reliable... not so much with the turbo engine in Midlana. After blowing it up during a track day event (while tailgating a Porsche GT3 - totally worth it), I came across a phrase that describes turbo engines pretty accurately -

Drivetrain aside, the car is very reliable, and kind of like driving a big shifter kart on the street. Just have to always assume that no one sees me, and to always have a planned "out" should they move over, much like riding a motorcycle.
You must log in or register to reply here.
Share:
Facebook Twitter Reddit Pinterest Tumblr WhatsApp Email Link
It can take up to an hour for ads to appear on the page. See our code implementation guide for more details. If you already have Auto ad code on your pages there's no need to replace it with this code
Top