Which do you find gives easier, more repeatable results?

I perfer thread gauges but sadly those don't check multiple sizes.... A thread mic is far more expensive than a the wires but it is easier to use...

Both should be fairly good at repeating as long as what you are using isn't junk. As said, thread mics are expensive. I have one with interchangeable anvils for 0-1". With mics are you limited to diameter range & thread pitch range unless you get one with interchangeable anvils. Thread wires are inexpensive & work well but take a little longer. Can also be cumbersome if you don't have 3 hands but there are good ideas for holding aids if you need. If you need to measure a wide range & not that often thread wires might be a better choice.

I don't have the need for thread mics , ring gages or plug gages any longer !

A set of Pee Dee standard and metric wires reside in my box these days , and I haven't used them in 5 years . I think their about 15 bucks a set vs $$$$ for thread mics .

mmcmdl said:
I don't have the need for thread mics , ring gages or plug gages any longer !

A set of Pee Dee standard and metric wires reside in my box these days , and I haven't used them in 5 years . I think their about 15 bucks a set vs $$$$ for thread mics .
Click to expand...

They're a bit more than double that price now but Fisher is still making them. I've been meaning to buy a set but I haven't had a need for measuring pitch diameter in a while. I guess I better buy a set before they get more expensive or Fisher stops making them. Imports are $15 now.

I honestly can't remember the last time I chased on a lathe . I had the cnc up until 99 and used my geometric heads on the smaller lathes . Probably mid-nineties making gun barrels . We had all the thread ring gages in all different classes back then . Heck , where I'm at today , I use a nut or a bolt for gages !

Times sure have changed .

Actually, the Chinese thread mics are pretty reasonable. They come with interchangeable anvils and at least the Fowler one I used was quite good. I now have Tesa 0-1" and 1-2" thread mics but that's just bragging; tools at that level are stupid expensive and totally not necessary.

dpb, the Three Wire sets are relatively cheap. For every thread pitch you are checking, you have to use three wires; two on top and one on the bottom (or vice versa). Then you put a micrometer on top of those wires and take a reading. Then you use a formula that comes with the wire set to figure out the pitch of your thread. Then you cut until you reach the pitch range you are shooting for. With practice, this can be done fairly fast.

Thread mics are direct reading. Use the right anvils and close the mic down on the thread and read it directly, no formulas to calculate and no wires to drop into the chip pan. Faster, very accurate (in the thousandths) and simple to do.

Both work, especially if you are cutting threads to a certain accuracy class or if you're trying to fit a preexisting thread. In a hobby shop, most threads are cut to fit and are one off so measuring pitch isn't often done. I do it because its fun to hit a tolerance range but you can certainly get along without measuring pitches most of the time.
M

Thread mics are great no doubt! Limited in pitch diameter with anvil can get expensive.
Using wires is a skill I think one should learn along with the formulas. Even if it sits in the box for five years having used nuts and bolts for guages it s nice to have and know how to use them for that occasion you may need to hit a class of thread an offsize from your mics or maybe you want to tackle a double start acme thread one day. Try finding a nut for that one.
Just nice to have. Cheap and reliable!

The other thing to consider is that cutting threads with carbide inserts and trying to hit a class 3 thread pitch range can be challenging. It is far easier doing it with a good HSS tool. Just saying.

That being said, I have $300 invested in screw pitch mic's. Never used the 2"-3" set, or the 1-2" setting at my Clausing lathe. If you only do occasional threading, the thread wires would be fine. 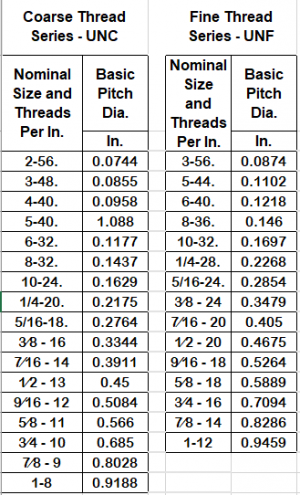 I picked up a triangle pair with a stiff rubber connecting the two triangle rods that are used to check threads and easy to hold to mic. BUT I got them at the swapmeet for $2 and have never used them yet. comes with a chart for the readings.
https://www.ebay.com/itm/Thread-Mea...923803&hash=item41cd872c46:g:RKkAAOSwMQBaEjOV

If you are in a pinch you don't even need real thread wires. You can use any close wire and do the math. A ball of clay is great for holding one end of the wires. That's what I have done with good success.

As soon as Styrofoam became common for packaging (remember the days of cardboard packaging?) I've kept a piece or two in my box to hold thread wires. Yeah, I've dug several out of the chip pan, but that was before Styrofoam.
M

Thread wires are a pain but they're cheap and get the job done. For home use I'd recommend this.

Thread mic saves a lot of time but comes with added expense. Probably best for job shop work where you have lots of threads to measure, but time is money.

Finally for production, thread ring gauges are best. They only give a Go No-Go for one size, but they're fast and very reliable.

Been using triangles for many years. I have the type mentioned above but also the type that actually attach to the mic anvils. They're pretty expensive compared to what I paid!
B

Thread mikes win hands down, the ones that I have, I bought on e bay relatively cheaply, they have fixed anvils, and are in the more common pitch ranges; I also bought Polish made interchangeable anvil sets up to 4" but sold them along with my business; thread mikes are fast, accurate, and read directly in pitch diameter, no calculations necessary, just look up the thread specs in Machinery's Handbook --- and go at it. Having said that, I agree with most of the other comments, you most always just fit a thread to a nut; one thing, 'tho, best to run a sharp tap through the nut first to eliminate possible burrs. About the only time I bother to use a thread mike is when I'm making a thread (plug) gage to use for gaging a internal thread to be cut in some pitch or diameter that I do not have a sample to use as a gage.
I also have triangles and wires, but hardly ever use either. One old machinist that I knew once brought a job to me to do, with wires to gage the thread, they were all that he had to do the job, made of baling wire! They worked well enough ---

For me- full profile lay down threading inserts with a thread mic make it a lot easier to hit class 3a threads when single point threading.

No doubt thread mics win but for 30-50$ you can do all threads no matter type or pitch. Kind of a staple for a machinist I think.
M

The main advantage for me to use wires with my current projects are the ability to measure the PD and other aspects to greater accuracy. Thread mic typically have three decimal place readings. Although generally good for hardware, I needed four decimal place readings to produce ISO:1948-1987 camera lens threads.

The Pratt and Whitney Supermicrometer G-2100 makes it very easy to read the correct dimensions for PD due to the pressure sensor on the tail stock. Hand micrometers are more accessible if the part is checked during the machining process (on a lathe). The G-2100 micrometer is great for measuring multiple components from various suppliers.
B

Please disregard this if you are building interplanetary spaceships, artificial hearts, bionic eyeballs or fusion reactors. It has been hypothesized that 90% of all fasteners are in the 2A fit category and the above mentioned project builders will not be happy with anything other than a 3A fit. One other thing if you make an external thread to 3A tolerance and mate it to a 2B internal thread it is not a class 3 fit.

Ok, we got that out of the way. In the previous post I was asked about the issues using a single wire method and I stated that you needed a sample to start with or a predetermined PD with tolerances and I wasn’t confident of the accuracy but it works well enough to make tractor and steam shovel parts.

So it got me to thinking is there a way to determine the PD of any diameter external thread and measure it fairly accurate with only one wire? This resulted in writing a program for my calculator to determine the measurement of the PD over one wire.

Here’s where the rubber meets the road. In some attempts to thread I was disappointed to find I had to undersize the measurement to have the mating internal thread fit nicely. So I went back and looked at the formula and determined that the formula to calculate the PD from Machinery’s Handbook calculated close to the max PD allowed. If you throw in a few more variables that are not perfect your fit might come out snug.

So back to the formula and I tweaked it so that the PD was about in the middle of a 2A tolerance and the results now were much more predictable.

This brings up the final point, if you want to hit the PD accurately your thread tool needs to be as accurate as possible, the tool needs to be perpendicular to the work and last but not least the wire needs to be very accurate in being round and sized, both within the required diameter for the pitch and diameter measurement. A small error in diameter of the wire results in a larger error in the PD.

Most of what I thread I have a corresponding internal thread to check against so I don’t worry too much about the accuracy as I’m not building any of the aforementioned items. I also don’t have the luxury of having thread wires so I have used small drills, copper wire, and paper clips anything close to working to measure the PD. Plus I don’t have a T&C grinder to make my threading tools and use inserts, my HSS tools are hand ground on iffy pedestal grinders.

If I pay close attention to my cutting tools and my setup and use the proper wire I feel confident I can hit the PD of any external thread and it will fit even if I don’t have the mating internal thread, without juggling three wires and losing one in the chip pan.
You must log in or register to reply here.
Share:
Facebook Twitter Reddit Pinterest Tumblr WhatsApp Email Link
It can take up to an hour for ads to appear on the page. See our code implementation guide for more details. If you already have Auto ad code on your pages there's no need to replace it with this code
Top
AdBlock Detected