Thank you in advance for any help that can be offered. I am hoping that my problem is as simple as a faulty switch, but....

I have an Emco V13 which has a 3HP 3ph motor mated to the wj200 2.2kw VFD. I have been running the machine for about a year now, and have had some progressive issues with what I will call unwanted braking just after the unit warms up, and then it usually runs well. The progression has lead to the VFD turning on when power is applied, running for a few seconds, and then shutting off with only the green pwr button blinking a handful of times and then nothing. I have a 300W 40ohm braking resistor wired per instructions, and it has worked very well.
I waited at least ten minutes after power has been cut before performing any wiring changes.
I have taken motor, including ground, and control wires as well as the braking resistor wires off the VFD, and restarted the VFD on its own (also checking all connections in the safety switch including fuses, and the VFD power/ground wires). It goes through its normal start up with no issues - this is progress as previous to this it would not even turn on!
I reattached the motor wires (power disconnected for 10 minutes), applied power to the VFD, and it ran through the start up again. No issues and no error codes - progress?
Reattached the control wires, but not the braking resistor, after checking the connections at the lathe to make sure there were no obvious breaks in the wire or loose connections. Started up just fine, no error codes, so I tried the forward lever on the apron, and the chuck spun in the correct direction with no issues. Put the lathe in reverse - no issues. Forward at about 700rpm, and it ran for a few seconds, didn't quite get to full speed as I have it set for a 5 second ramp up , and it stopped as if the lever had been switched to neutral. The chuck stopped as it normally would with the braking resistor attached (I imagine this is the VFD's internal resistor doing its thing).
The VFD's fan, at this point, was running though the screen went to all ------, no alarm or code was flashed, and it shut off.

Prior to this level of shutting down on its own, the VFD would brake like this for about a minute or two after it had run through the start up (I always wait for the initial fan to stop running before applying power), but it would always then continue working. I know...I should have stopped there, and tried to figure it out, but I didn't - I had work to do! .... I'm an idiot.
The thing about it is that once it made it through those initial hiccups it would run great for hours with no problems - my shop would get down to about 50 or so and I ran a ventless propane heater in the winter getting it up to about 65'ish.

Any ideas/questions/concerns?
Thanks guys,
Mike

I would post a photo of your wiring to the VFD, motor nameplate, VFD programming values and the error codes the VFD is showing and under what conditions. Make sure there is no neutral wire connected to the VFD and the 230VAC is connected to the L1 and N terminals. I would also check the ohms of the braking resistor that it is not damaged or shorted, and yes the VFD has its own internal braking resistor so you will see some degree of braking without the external braking resistor. I have seen a few cases were the neutral wire was attached and it caused similar symptoms to what you describe. Make sure the AVR voltage A082 is set to the motor nameplate voltage

The cooling fan cycles on depending on how it is programmed. The default is on for 5 minutes after stopping.

The VFD should not start or rotate on start-up, one input function should be programmed to 13 USP:Unattended Start Protection), this input should be active on power up. Depending on how you wired the run inputs, they should not be directly connected to the spindle switch, you should use some form of interlock latching relay that latches only in the stop spindle switch position. I have this setup so that USP is always active on start-up if the spindle is in the run position and additional interlocks through relays. Sometimes the spindle switches can be problematic.

Fault on acceleration is often caused from wrong motor parameters and current overload being set incorrectly. Makes sure the motor kW, V and poles is set correctly H002-H004. Run autotune with the belt off and then select H002 = 02 auto tuned data. Make sure you are running sensorless vector A044 = 03. Set A041 = 01 automatic torque boost. On acceleration with heavy chucks, some lathes do better with linear acceleration A097 = 00 linear and 3 second acceleration times. I do not use DC injection, I find it cause more problems in this application, so A051 = 00 Disable. You can increase the overload restriction level B022 to maybe 180%, but in general I do not recommend it unless you have a vector motor.

I have seen issues with the WJ200 under heavy load just stopping with no fault code, it is not clear if this was a temperature or an overload exceeding B022 for 1 minute, the display can be programmed to amps so this can be monitored.

It is possible that there is a VFD problem, although I have yet to see a WJ200 failure in the field with 100's of installs. You can also call the VFD supplier and/or Hitachi Tech. and they may be of some help.

If you want a default WJ200 parameter file that I use on lathes, PM me with your email and I can send it to you.

Sounds like it's time for a new VFD, yours seems to be confused. They are so cheap today I concider them a throwaway item. I had some similar problems with the VFD on my air compressor. The frequency of failure was directly related to shop temperature, <65°F it would run OK, at 90°F it wouldn't run at all. Replaced with a new one ($219) and ended the problem.

There also could be a problem with the wiring or switching on your lathe.
M

Thank you both for the quick replies. MKSJ, I used the parameters in the file that you had suggested in a previous post, and am truly grateful for the detailed information.
Unfortunately, there have not been any error codes being shown during any of these events, just "-------" and then shuts off.
I am going to go through the commands again in case something had been switched back to a default for some reason, but other than the initial setup there had not been any parameter changes and no issues for the first 6 months of operation.
I did test the brake resistor and am getting 0ohms at this time.
I checked and there is definitely not a neutral wire hooked up to the VFD. It is terminated in the safety switch box.
I will look into the interlock latching relay as well and see if that doesn't help the problem - I do have my control wires hooked directly from the lathe spindle switch to the logic controls on the VFD so maybe that is an issue. I have not had any issues with the lathe rotating on startup, fortunately, and have used the USP as you mentioned in your detailed file previously (HUGE help to me when I was setting this thing up).
I will go through the parameters and let you know what I find. I hope I don't have to get a new unit, but if that is what it takes I will get it done. I want to make sure that if there was something that I did wrong at setup that it doesn't happen again!

mds30br said:
I did test the brake resistor and am getting 0ohms at this time.
Click to expand...

Now, unlike earlier this afternoon, with only power hooked up and no motor/control wires hooked up it won't turn on.
Might be time for a new one, but I want to make sure I get it right this time!
I have an automation direct unit on my mill and it has been running great for about 3-4yrs now.

The Automation Direct GS3 units are my favorites.

So what you are indicating suggests a failure of the power supply or an under voltage on the input 230VAC supply. You get the dashes followed by the unit shutting down with under voltage. This can also cause trips in acceleration with shut down. I would check the input voltage and also check your VFD input supply wires that you do not have a loose or poorly crimped connection. Be careful with testing connections as the VFD needs several minutes to discharge its power supply capacitors. If the VFD is relatively new, it should be covered under warranty. On the spindle switches if you are using a switch that was previously used for high voltage, then the contacts arc and the connections are poor for low voltage signaling cause intermittent run commands. As mentioned, the WJ200 VFDs are good units, but you can see failures of electronic devices no matter how robust the QC. If I were to suggest an alternate, these days I probably would look at the Teco E510 or Yaskawa V1000. If you do decide to go with a different VFD I can give you suggest programming parameters, although both of these VFDs are a bit more complicated programming wise.

As Jim mentioned, the brake resistor should measure 40 Ohms, +/-10%, not 0 with the wires disconnected. 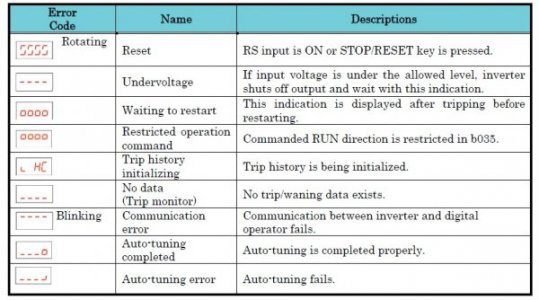 MKSJ if you were close by I would take you out for a steak dinner!
I checked the input voltage and, sure enough, one of the wires was reading none at times, then 109, and at one point 78! I traced the problem back to the breaker for which I had purchased a spare when I started this project figuring I would need to trade out 2 20's somewhere. There was a 30amp breaker in the subpanel for a previous, now unused, dryer hookup, and I just made a junction box (I checked that connection as well, and it was solid) from the 10g wire already present and in good condition.
After cutting the power to the subpanel, I swapped out the old breaker for the new one, and bingo both lines are running 120! AND the unit fired up, and ran great through a good 15 minutes of fwd, reverse, threading and turning! I plan on running through the VFD parameters again just to be sure that all is well, but so far so good.
I fixed my slice at the driving range...almost completely, backed into a car I couldn't see behind me at a stop sign with my truck, and then I get the VFD running. What a day!
Mike
You must log in or register to reply here.
Share:
Facebook Twitter Reddit Pinterest Tumblr WhatsApp Email Link
It can take up to an hour for ads to appear on the page. See our code implementation guide for more details. If you already have Auto ad code on your pages there's no need to replace it with this code
Top
AdBlock Detected