I am going to post some videos of these machines in action.

It would be great if people posted information and videos about how to run them.

Just look at the power and stoutness of this machine making a 3/8 cut in steel no problem.

That's a serious lathe, but most commercial shops would have a couple three like that, anyway. A hobbyist could wish.... 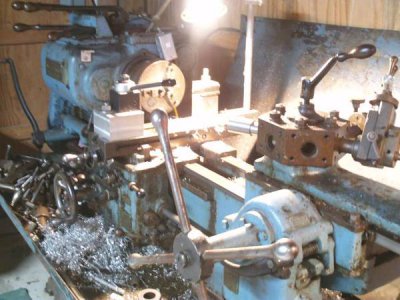 On the contrary for hobbyist. These machines are very inexpensive. I got mine for $700 plus $100 for the guy to deliver it to my pole barn. It is fully functional, has a collet system and a large amount of collets, lot of other tooling. I put on a quick change tool post to make it easier to use.

It is worth keeping an eye out for these. Lot of them are just sold as scrap by weight. For what you get for the money I think it is a great great deal.

With CNC it doesn't make sense to use the manual lathes anymore for production and that is why they are discarded.

Back when these were building parts for battleships and tanks there would be dozens in a row each with an operator cranking out parts. There is a poster from the era saying the turret lathe was winning WW II more than anything else.

EDIT: Just noticed you are in Ohio where these were made and used. You would have a better shot than most finding something nearby to go over and look at then bring a trailer.

Check out this one with an entire part cycle, knurling, threading, cut off.

This one shows the turret in use. Can see the turret tail auto feed in some of it.

If a hobbyist really wanted one it might be very fruitful to call around to various machine shops and ask if they have "An old Warner Swasey Lathe they would like to get rid of." Mention the hobby status and you would take care of hauling it out of the shop. Might get a nice deal or free. They do take up lot of space and if a shop is not using it they sometimes just want it gone. The guy moving mine did it with come along winches and inch by inch pulled it off the trailer and into place.

Cadillac STS said:
They do take up lot of space
Click to expand...

Yeah, that's my problem, no space. It would occupy 1/2 of the floor space in my shop, not just available space, 1/2 of all of the space. There are many tools that I'd really like to have, but space, more than budget limits me. My 8 16 Ames turret late is going to have to suffice.

I had one years ago and they do take a lot of stock off in one shot. I can remember taking a cut the full depth of an insert and the machine didn't even slow down. They can be real cheap when found since many places today tend to go to CNC. Some of the used machinery places might even have one they would gladly sell for a bit over scrap prices just to get rid of them.

Back when I had my shop I had some Warners , one at a time . All were number 3 's . I finally settled on the one called a lever head . My "lever head " had some features not normally found , like threading with a lead screw you had to change the screw to change pitch . And it also had a taper attachment . I almost always had it set up with the collett system and the bar feed . The big lever in front of the machine is for the collett system witch also advanced the barfeeder .
https://www.google.com/search?q=warner+swasey+no+3+turret+lathe&biw=1366&bih=643&tbm=isch&imgil=bvY9NRgS-kywnM%3A%3Bp-7C2JJgJ4fR0M%3Bhttp%253A%252F%252Fwww.ebay.com%252Fitm%252FWarner-Swasey-M-1200-3-Turret-Lathe-%252F121386099401&source=iu&pf=m&fir=bvY9NRgS-kywnM%3A%2Cp-7C2JJgJ4fR0M%2C_&usg=__5VqZYa8dhhXuouwkZb3W-6O1GzM=&dpr=1&ved=0ahUKEwix6piMiO_OAhVRx2MKHX0UCJsQyjcIeg&ei=9pbIV7GXLNGOjwP9qKDYCQ#imgrc=REzdyADD-OFgpM:

They're out there. I know where there is one sitting out by the road, as if waiting on the garbage man. Probably worn out. It's been there for years. It's between me and jpfabricator, so I'm sure he has seen it. I have no use or desire for one. I have a picture in my HS yearbook 0f me running one. The pic was all set up of course. No safety glasses around, so borrowed some prescription glasses from a schoolmate. My first machine shop job, gotten with help from my voc ed teacher was 2nd shift turret lathe roughing out valve stems for stuff headed to the TA pipeline. I learned to hate the thing. I have spent too much time on them things. Up to a 50hp. Can't recall if it was a WS though. I know we had a #4 and a #5 in the shop besides that 50hp, but no one wanted to run them. Also had a little Metric baby turret lathe. The handwheel ran in and out with the cross slide, and when you got it in just the wrong spot, it would not allow my hands between the carriage and cross slide wheels....ouch on the knuckles. Beautifully accurate little machine, as long as you didn't mind doing a lot of head math. That one I wouldn't mind having here.

Serendipity just stumbled across this while poking around the Shorpy web site:

(The Shorpy web site has lots of interesting old pictures.)

Register Today
I've got a Bardons and Oliver (topic of this thread http://www.hobby-machinist.com/threads/bardons-oliver-5.16120/#post-127783) and I love it. Very similar to some of the W&S's shown above. Got it for $700 less than 5 minutes from my house. Definitely a work horse. It does wear me out if I stand in front of it too long but for short production runs I can't beat it. Especially when compared to the cost of even a used CNC. I do understand why a modern shop wouldn't want one though. Modern machines are just way more productive. For a hobbyist, I think some people are missing the boat. It's not right for everyone but definitely get's good use in my hobby shop.
You must log in or register to reply here.
Share:
Facebook Twitter Reddit Pinterest Tumblr WhatsApp Email Link
It can take up to an hour for ads to appear on the page. See our code implementation guide for more details. If you already have Auto ad code on your pages there's no need to replace it with this code
Top
AdBlock Detected