I made a few more of the z axis parts today and i posted videos in the zx45 thread
http://www.hobby-machinist.com/showthread.php/8187-rung-fu-clone-RF-45-ZX45-cnc-conversion
and here are a couple pics
steve 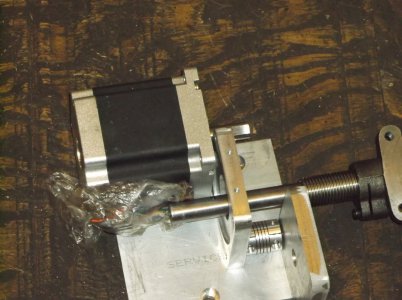 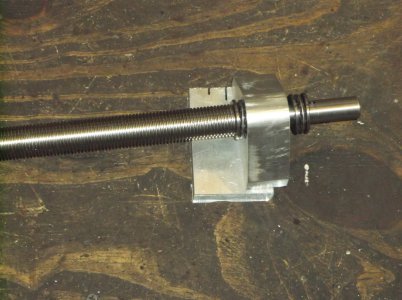 I finished the z axis today and test ran it everything is smooth so now i'm ready to start the electronics and clean it all up and assemble.
the electronics on the lathe are really basic just 2 axis. the speed it is moving in the vid doesnt mean anything the motor driving it is from my mill just plugged into the lathe to test the movement. i'll have to tune the lathes motors after they are installed and i hope i can get higher speeds than this.
steve

I started on the electronics enclosure and mounting everything today. i used an old pc tower case cover added a vented back and made the rest of the parts to complete the box. the electronics will fit nice in there nothing fancy.
i'll wire everything tomorrow. the third plug is for the tach signal it is a 5v infared pickup i will be mounting inside the belt cover. it is just 3 wires pos 5v, neg and an input signal to the breakout board. i'll post a pic of the pickup when i mount it, it was cheap on ebay... i think it was $3.00 and free shipping. you have to have it if your going to thread with the lathe.
steve 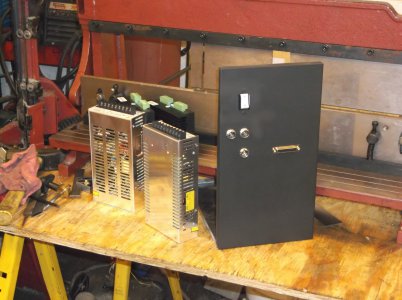 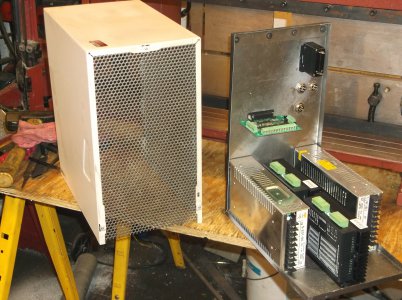 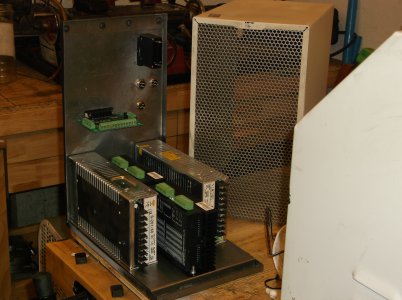 there is no gear train anymore so to thread mach3 has to know the exact rpm of the spindle to move the z axis in time with it to produce the desired thread. everything is done by the stepper motors now so to make course threads the z axis better be fast or the spindle speed slow.
here is a video from youtube of a lathe threading with mach3.
steve

jumps4 said:
there is no gear train anymore so to thread mach3 has to know the exact rpm of the spindle to move the z axis in time with it to produce the desired thread. everything is done by the stepper motors now so to make course threads the z axis better be fast or the spindle speed slow.
here is a video from youtube of a lathe threading with mach3.
steve
Click to expand...

I wired the box today and spent all afternoon trying to figure out why i could not get much speed out of the motors. the opticouplers in the breakout board they sent with the controlers is so slow it will not run on any setting faster than 25000hz so my uc100 controler that does 100000hz is useless with this breakout board. so i'm going to order a hard wired breakout board i dont need optoisolation with the uc100. so the motors are running just not fast enough to cut a course thread unless i install a dc motor drive i have for a slower spindle.
steve 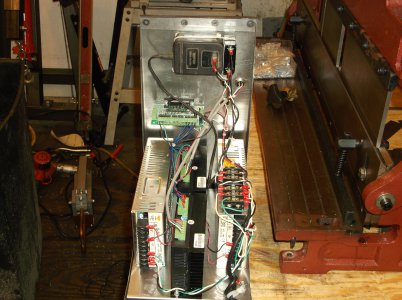 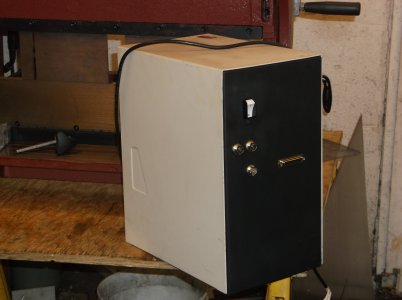 It's more than a mere tachometer, actually. If you could cut the thread in a single pass, then sure, knowing the spindle speed would be enough to establish a correct feedrate to produce a given thread pitch. But since you won't be doing a thread in a single pass, the tool must be timed and synchronized with the spindle throughout the entire threading operation. So after each pass, the control must know where in rotation the spindle is, not just how fast it's running. That requires an encoder for positional output. Of course, the signal from an encoder can drive a simple counter to give a speed readout.

It's the electronic version of the thread dial and knowing when to drop the halfnut lever.

tony
mach3 by its self works with a single pulse your right about knowing location but an encoder would also have to be single pulse to work with mach3. there are addon softwares/controlers that use multipulse for mach3 though. this uc100 is supposed to use multipulse but i havent read up on it yet. the problem for mach3 and multi pulse comes back to processer speeds and the 25000hz setting of mach3 the tach would use too much processor time leaving nothing to move the axis fast enough. once i get another breakout board with no lag the i can run my speed up to 100000 hz and use multipulse by adding more reflective tapes. as it is right now i can only get 50ipm and my minimum spindle speed on the 9x20 is 120 rpm that probably to fast for 50ipm.
steve

I didnt do much today but clean some parts and install the headstock then i trammed it. for those who dont know there are set screw holes in the back of the headstock on the 9x20 for tramming you have to get your own screws but it makes it pretty easy. i included a pic of their location and a video of the tram and runout 18" out from the headstock it's jumpy but you can see i have about .0005 runout at the collet chuck, and .0025 18" out from the headstock. centering the runout on the bar the tram is 0005. or less.
steve 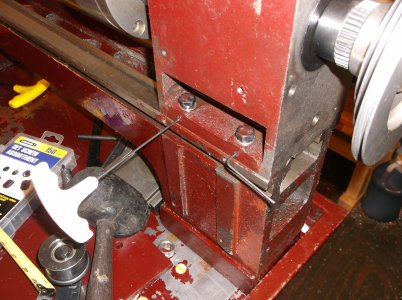