ChrisAttebery said:
I ordered two sets of the cheap AC bearings from VXB that I had originally used.
Click to expand...

One note on VXB bearings. I bought a set of bearings for my mill head, not for the spindle, but for the drive area. The ''grease'' in the bearings looked like a mixture of sand and tar. It was stiff enough that it actually spun the bearing in the bore. These were sealed bearings and I didn't catch it when I installed them.

I would wash out the new bearings and apply some good grease when you install them. https://www.amazon.com/Kluber-Isofl...LEX+NBU+15&qid=1593889295&s=industrial&sr=1-5

IIRC the bearings were packed in light oil. I’ve been using the Kluber grease since I built my machine. I’m wondering if I put too much preload on the bearings. I usually tighten them until the spindle only turns a couple revolutions when I spin it by hand.

It's been a long time since I've updated this thread. Let's see if we can catch up...

I replaced the AC bearings with Timken tapered bearings and the TIR is slightly higher but I haven't had any more issues with the spindle since.

I managed to crack the moveable jaw on my CDCO 4" mill vise. I replaced it with a Kurt DX4. It's amazing how much nicer it is. The vise feels more solid and a lot more repeatable.

A couple days ago I made a Kydex cover to go over the leadscrew and vise body. I covered the back with stick on magnetic sheet.

I made my last cut with Mach3 and the Ethernet Smooth Stepper a couple weeks ago. I made a set of mounts for the VFD and cut a window into the front on my controller enclosure so I could mount the VFD inside. 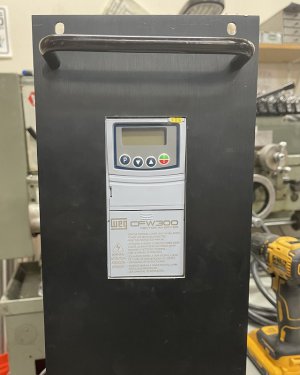 After that I stripped out the ESS, BOB, and C6 variable speed spindle control boards. I also removed a couple 5V and 12V PSUs that were no longer needed.

I bought an Acorn controller and wireless MPG from Centroid in December. I got the Acorn mounted and rewired the entire controller. I have all of the 110V and 220V wired through relays that are tied to the E-stop. The only power that isn't tied to the E-Stop is for the Acorn itself.

I made a few changes to the hardware
1. Replaced the cooling fan in my 48V PSU. It had been making noise for years.
2. Installed a dedicated 24V/2A power supply for the all of the I/O, power relays and case fans.
3. Installed covers and GX-4 connectors on all three stepper motors.
4. Replaced the crappy homing switches with Metrol Precison limit switches on all three axis. These Metrol switches claim 5 micron repeatability. 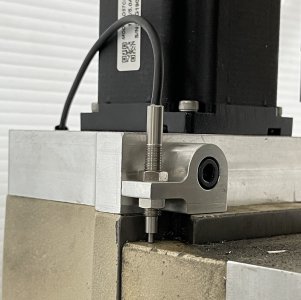 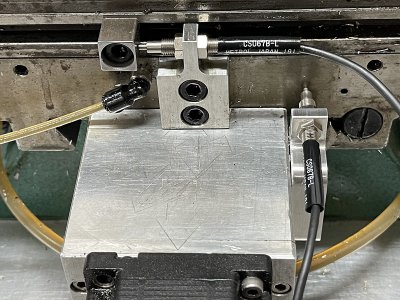 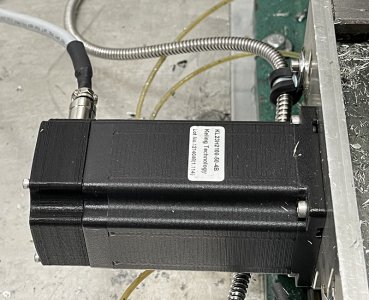 I finished up the controller, moved it back into place, and cleaned up all of the cabling between the machine and controller. I also mounted the NUC and bundled all of the PC wiring on the back of the monitor and got the monitor mounted to the enclosure.

I installed ProbeApp V2 this morning and measured a few of my tools. According to ProbeApp my TLO setter is repeatable to .0001". I *think* that should be good enough. 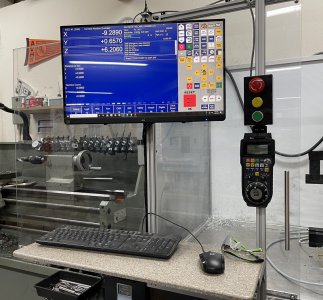 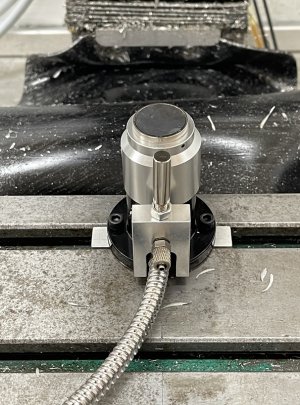 The last big change I wanted to make is to get a 3D touch probe. I was about to order a hobby grade unit but I asked around and someone mentioned that they purchased a used Renishaw probe on eBay and made an adapter for it. I started looking around and found a MP3 probe at a used tool store about 30 miles away. I picked it up last Friday.

I Saturday I found a thread on CNCzone about using the Renishaw probes on Tormach machines. Someone mentioned that they bought one that was DOA. I decided to test mine out and sure enough it was completely dead. The head measures in MegaOhms no matter which pins I measure against. Welllll $#!+!!!!! I talked to the guy I purchased it from and I'm getting a full refund.

So I started looking for another MP3 on eBay and found a brand new head with the inductive pick up and CAT40 taper for $400 with a warranty. That's more than I wanted to spend but I watched it anyway. I got an offer from the seller on Sunday morning for $300. I countered their offer at $250 and they accepted. So, I should have a working probe on Monday.

Another thing that they mentioned in that thread is that the probe really should be used with a probe interface. It is more accurate and will save wear on the contact points inside the head by shutting off the input voltage to the probe when it senses that the contacts are about to be broken. The MP3 will work with the MI5 and MI8 interface units. The MI8 are cheap. I picked one up for under $100.

On Thursday I received the Renishaw MI8 interface unit and a few goodies from Amazon. I mounted the MI8 in an aluminum amplifier enclosure. On the control side I mounted a GX4 connector to provide 24V, GND, probe detected and probe triggered. On the probe side I mounted a DIN5 connector to provide probe +/-, probe detect and GND. I also mounted a super bright LED on the probe side. I mounted this interface unit under the keyboard tray next to the enclosure door for easy access. 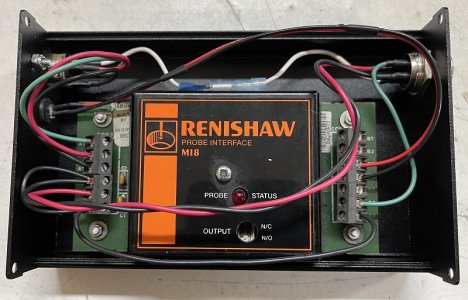 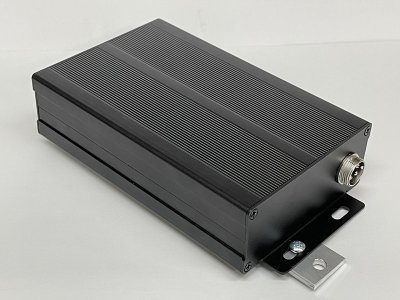 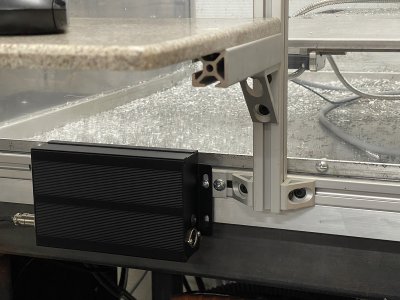 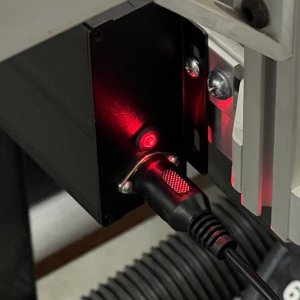 I made an R8 adapter for the probe out of an R8 to JT33 arbor and a 4" x .75" disk of aluminum. I pressed the tapered SS insert out of the Renishaw inductive adapter. I bored a pocket for it in my adapter. I used a slip fit and Locktite 609 sleeve retainer to attach it. I wired up a DIN5 connector with probe detect, trigger +/-, and GND. The probe detect signal is tied directly to GND.

The new probe head is supposed to be here on Monday. I can't wait to try it out. 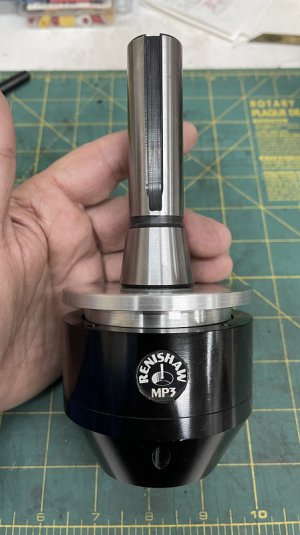 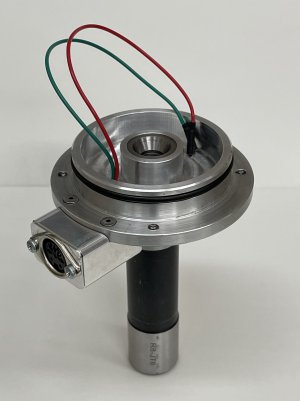 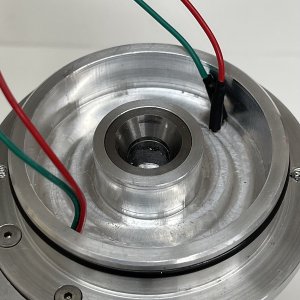 So far the most noticeable improvements with the Centroid setup have come from the software and hardware controllers being super reliable. I'm not having to constantly restart Mach3, re-home the machine and re-locate my WCS. When I do home the machine the homing switches are so accurate (.0002") that they basically repeat to one step on the motors. According to the probing software I'm using the cheap tool setter is also repeatable to .0002". So I can hit the E-stop, leave the controller running, come back the next day, re-home the machine and not have to worry that the WCS has moved. I can also run Fusion360 on the same PC that runs the machine so I can make minor changes to the code in between cycles without having to use another PC (usually INSIDE the house). It's been refreshing.

When I converted my G0704 CNC mill to Acorn I needed a method of measuring the tool length offsets. I bought a cheap imprt tool setter off eBay. I needed software to use it though. I found that ProbeApp V2 from Swissi was priced right and really well done. After using it to measure my TLOs I decided that I wanted to start using 3D probing. I didn't have the budget for a new Centroid probe so I asked about budget probes. Muzzer was kind enough to point out that Renishaw MP-1 or MP-3 probe heads are available fairly cheap on eBay. I picked up a NIB MP-3 for $250. I also found out that they work best when paired with a Renishaw MI-5 or MI-8 probe interface unit. So I picked up an MI-8 for $90 on eBay. It was really easy to wire into Acorn.

Between ProbeApp, the tool setter, and the Renishaw probe tool and part setups are a lot quicker, easier and more accurate than what I was used to in the past.

Here's a video I put together: