Now that my recently-acquired mini-mill is up and running, I've started using it to make the mounting hardware for digital scales. I'll be installing a full set of Shars scales and using Yuriy Krushelnytskiy's "TouchDRO" hardware and Android app. I've already set up my Logan Model 200 lathe with TouchDRO, and love it.

I started with the quill scale, figuring that it would be the most difficult given the limited space. First to go were the factory mounting brackets. There simply wasn't room for them. After a lot of measuring and sketching I came up with a scheme for two L-shaped brackets, and only one needed to be bent. A flat "moving" bracket would attach the read head to the quill stop, and a "fixed" bracket with one 90-degree bend would attach the top end of the scale to the mill's head. The bottom end of the scale would float. I had already successfully used a similar approach on the X axis for my lathe DRO.

I milled and bent the brackets from 1/8" mild steel, and this shot is of the initial fit check, to make sure things aligned properly and to mark the length of the top bend in the fixed bracket: 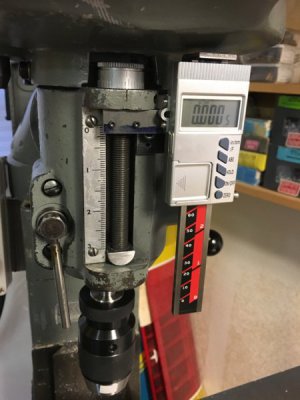 I can only use 3" of travel, so I cut the Shars 4" stainless vertical scale down using a cutoff wheel in my Dremel, then squared it up on my 6" x 48" belt sander. Piece of cake. After the fit check I milled the top end of the fixed bracket to align with the back face of the scale and drilled and tapped it.

So much for the easy part. I don't own a drill bit that will touch this hardened stainless, so now I'm waiting for the cobalt and carbide to be delivered. Once I have the tooling I will be drilling the top end of the scale to match the fixed bracket.

Marking, drilling and tapping the quill stop, in place, was a delicate hand operation, but went well. You can see the 2-56 cap-head screws that attach the moving bracket to it. To mount the fixed bracket the head was drilled and tapped for a single 10-24 cap head screw that you can see here just peeking out from underneath the moving bracket. After aligning and tightening the fixed bracket I drilled for two 1/8" anti-rotation roll pins, one of which you can just barely see here.

Once everything is assembled, aligned and tight I will install 1/16" roll pins in the moving bracket/quill stop and the fixed bracket/scale so that the 2-56 screws aren't shear-loaded and to stiffen things up.

I apologize for the verbiage. Pictures will be much easier to understand, and I'll be posting more detailed shots over the next few days if life doesn't get in the way.

Here's a shot showing how I made the brackets. I will be drilling and tapping a hole to relocate the thumbscrew to the left side at some point: 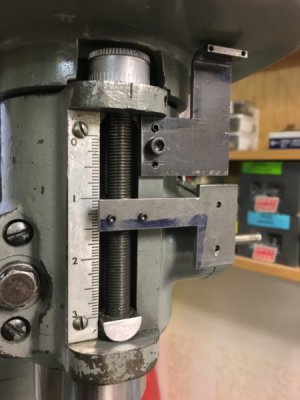 I'll probably "streamline" them a bit more. I plan to give them a black oxide treatment. I might also make a hairline indicator to attach to the left edge of the quill stop bracket.

I'm afraid that I have to wait a couple more days for some carbide drills. Cobalt drills won't touch the scale. I'm a little surprised by how easily I cut it with my wimpy little Dremel.
Last edited: Sep 30, 2017

Thanks for sharing the effort and the pics. maybe someday I'll get up the nerve to do this to mine.
I'll be "watching" for the next installment.

This shows both the relocated thumbscrew and the reason that I had to move it. I wanted to maintain access to the oiler on the fine feed: 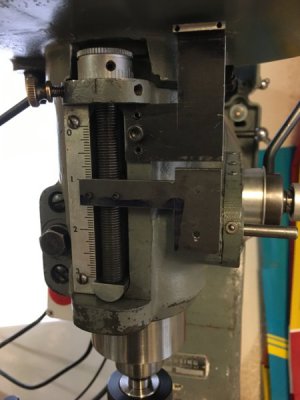 Z axis is installed and aligned: 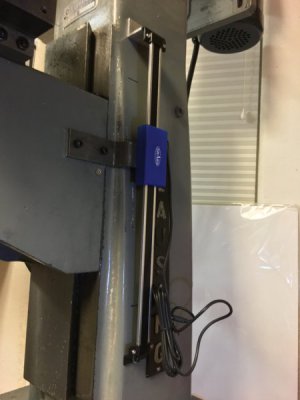 Looks like a nice clean install so far! I added TouchDRO to my PM727 earlier this year using one of the premade boards and used the W axis combined with Z so that the head movement and quill are combined. So far I have been very happy with my choice because I can move either the head or quill and still keep position on my tool. I do not know if this is normal on a mill but it sure seems to be a nice feature to me.

tweinke said:
Looks like a nice clean install so far! I added TouchDRO to my PM727 earlier this year using one of the premade boards and used the W axis combined with Z so that the head movement and quill are combined. So far I have been very happy with my choice because I can move either the head or quill and still keep position on my tool. I do not know if this is normal on a mill but it sure seems to be a nice feature to me.
Click to expand...

That's what I intend, and I'm assuming that the quill readout puts out a compatible format. I need a Micro-to-Micro USB cable to test it with one of the read heads, though. On my list. (UPDATE: The digital output from the quill works with a display from one of the other scales, and is ALWAYS ON even if the quill display has turned itself off. This is good.)

I believe that I can make a nicely-sealed Z-axis chip guard using some aluminum angle and door sweep weatherstripping. Also on my list. I should be able to pick up something that will work at the hardware store. Maybe I can get a picture up today. If I'm not happy with it I'll order a brush-type sweep from McMaster-Carr. (UPDATE: I bought the brush type and it looks like it will work well. Eventually I will post a picture.)
Last edited: Oct 17, 2017

I was wondering why the Y axis wouldn't lock up: 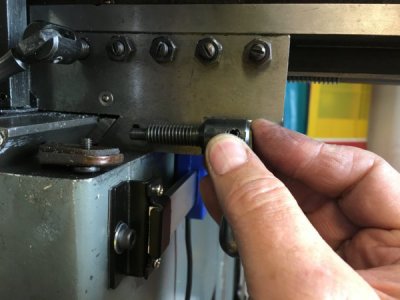 I don't remember it, but I just went through the bits and pieces again to make sure. At some point in this machine's life, the "645-012 Rod" went missing. So I made a new one. Right behind it you can see the 1/16" spacer (UPDATE: actually needed 1/8") under the mounting plate to provide some clearance when I install the chip guard: 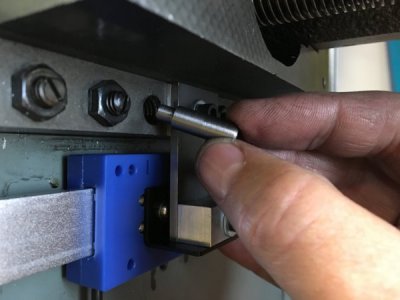 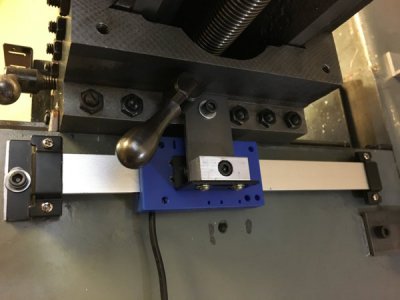 Hey, what's one more hole under there, anyway? I made the mounting plate 1.125" wide, and it butts up tight against the underside of the cross slide. I don't know how to make it any stiffer. There's just enough clearance for a box end wrench on that gib screw locking nut to the right.
Last edited: Oct 22, 2017

All the scales are installed, with just the Z axis cover to go.

I made some Y-axis cover mounting blocks to replace the temporary washers: 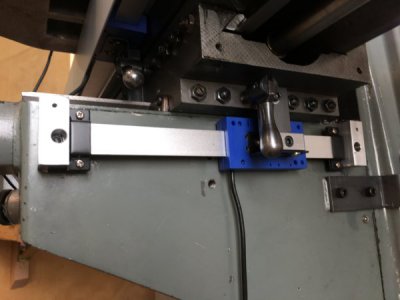 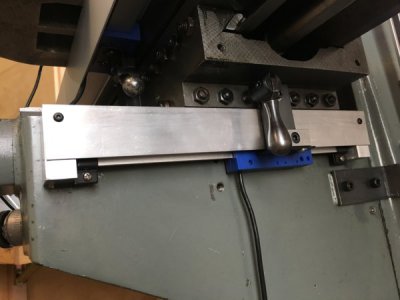 Laid flat in the front, I can still use the 1/4" t-slot, and I don't lose travel on the Y axis (where there's not that much to begin with): 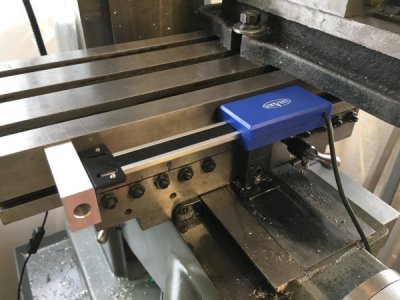 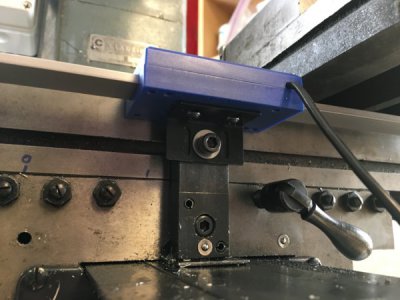 I had to order some 2-1/2" aluminum angle from McMaster-Carr and cut it down: 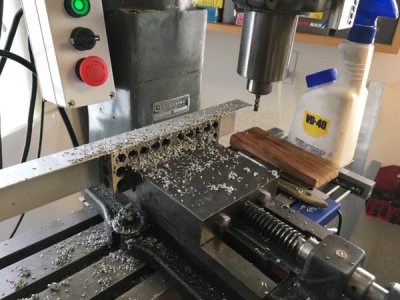 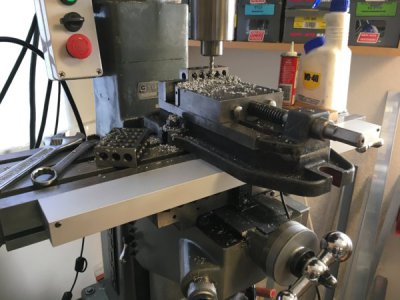 Also from McMaster-Carr, to keep the chips out of the Z-axis scale: 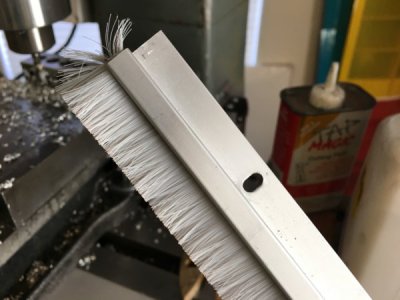 Hooked all the scales up: 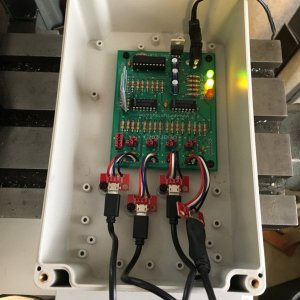 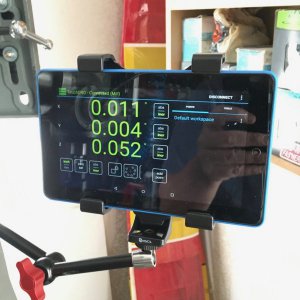 Just have to button up, mount the box, make the Z axis cover, do some cable management, and calibrate!
Last edited: Nov 4, 2017
You must log in or register to reply here.
Share:
Facebook Twitter Reddit Pinterest Tumblr WhatsApp Email Share Link
It can take up to an hour for ads to appear on the page. See our code implementation guide for more details. If you already have Auto ad code on your pages there's no need to replace it with this code
Top
AdBlock Detected