A week ago I was surfing Craigslist and there was a 2 hour old post for a South Bend 9" for all of $100, so I answered the add. The fellow was trying to clear a shop area from a relative's house in order to sell the place. He just wanted things gone and was happy to have me carry out just about anything I wanted.

Included with the lathe was a 3 jaw chuck, 4 jaw chuck, face plate, steady rest, and boxes of tooling. It was like Christmas in August. Here's the goodies on the trailer. The tail stock already made it to the basement. 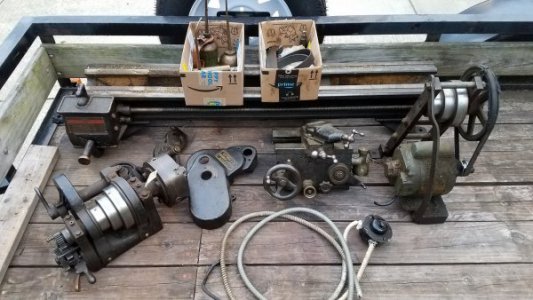 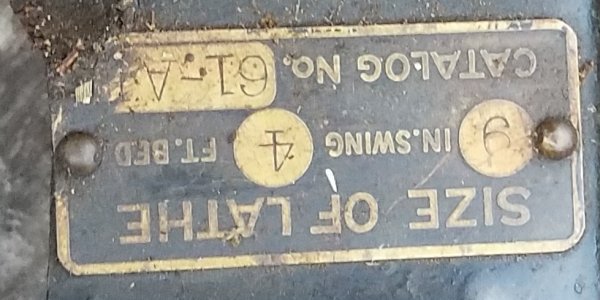 It looks like the motor drive is some sort of home fab, but a very nice job.

I'm having trouble finding a manual for this lathe. Anybody know where I can get one?

No idea when I'm going to have a chance to play with the toys, but still smiling from the sweet deal.

Talking to the guy down in Gaithersburg last night about not finding equipment . I told him he 's looking in the wrong places . Great find !

Good to see another Hazzard County resident on here btw .

Yes Virginia, I guess there really is a Santa Claus....

Have you no shame?
T

I forgot to mention. The homeowner wanted the bench gone also.
I took a day off and went down to disassemble the bench. Super solid cast iron legs.
There were three, but I think two will do just fine. 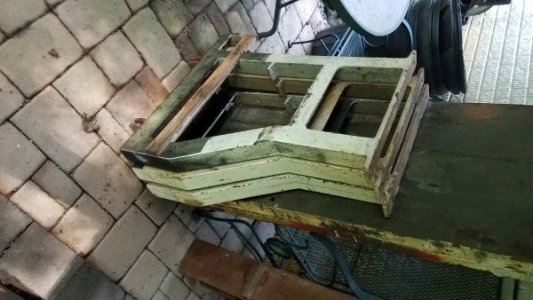 Time to pick up some hockey pucks and make a few big solid adjustable feet.

Google South Bend Lathe Forums. There are several. Here is an example. https://www.practicalmachinist.com/vb/south-bend-lathes/

Looks like a model "A" because of the gearbox. You have nice legs! Lol. 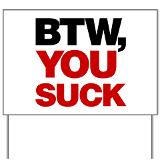 Good score! You'll have fun with that
M
N

I went thru the tooling and thought I'd share an image of some of the nicer goodies. 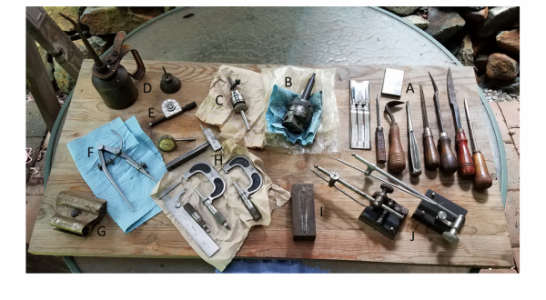 A: A bunch of nice scrapers, including a one piece cast screwdriver. There's an ice pick with a cast handle labeled "City Ice Co." from down in Baltimore. Next to that is what looks to be the first utility knife set ever made. The original owner kept everything very sharp.
B: An adjustable boring head that needs some TLC. It moved OK after it was oiled.
C. A very nice little mini-chuck.
D: I got a real kick out of the mini oil can.
E: Some sort of adjustable marking device? The pointed end moves with the dial. Not sure what it's used for.
F: A very nice compass.
G. This one had me stumped for a bit. Spring loaded clamshells with a round stone inside. It was labeled as a skate sharpener.
H: A number of measuring tools. One of the 2" mics is well used, but the one to the left is in really nice shape.
I: This block of metal looks like some sort of stamping die. It's shaped like the back of a spoon handle, and says "Sterling", but it only looks like part of a utensil. Not sure what it might have been.
J: A couple of layout tools that also need a little TLC. All the bases have pins that look like they're ground to be flush with the base. On some bases the pins slide, on others they turn. Is there anyone schooled in layout work that can tell me what the pins are for?

Kind of a neat stash of old tools. Still to clean 'em up and put them to good use.

TomKro said:
Is there anyone schooled in layout work that can tell me what the pins are for?
Click to expand...

The pins are used to run the "surface gage" (the real name for them) parallel with the sides of the surface plate. They should be able to be pushed to below the base or above the base.
D

TomKro: The item marked "E" I believe is a hand held RPM reader. It is used with a stopwatch and when set to "zero" before applying it to the end of a rotating shaft you can (feel/see) the dials rotating and when you hold it for whatever fraction of a minute you can then figure out how many revolutions the shaft rotates. The dials are read somewhat like you would read a watt meter and the reading multiplied by the time of measurement corrected to a full minute, giving you RPM.

I would never have guessed the use of the surface gage pins or the rev counter.

I looked on-line for pics of other "speed indicators" and saw one with a built in stopwatch. It's crazy what we take for granted with the electronics all around us.

Thanks a bunch for all the info.

That's a helluva deal. The serial number puts it somewhere in the 20's. Most likely 1922. There's 2 sources I use for dating. http://vintagemachinery.org/mfgIndex/detail.aspx?id=1617&tab=5 is a pretty good resource and you will find lots of additional information and pictures there. Also http://www.wswells.com/sn/sn_db.htm is a great database that is constantly being updated. I encourage you to submit details to both. Also you can get an original copy of the serial card from Grizzly, which I have for both my SB lathes, then you will have the actual, rather than best guess date.
Good Luck and enjoy your lathe.

Canus and craptain, thanks for the links for helping to date the hardware.

The first time I looked I failed to scroll down far enough, but I do believe 1922 is really close. That is pretty old for a functional machine. Just a few minutes ago, I managed to loosen the carriage rack screws so I can "de-goo" the bed. I don't plan on messing with the black finish, just getting it cleaner so I can bring it inside.

TomKro said:
Canus and craptain, thanks for the links for helping to date the hardware.

The first time I looked I failed to scroll down far enough, but I do believe 1922 is really close. That is pretty old for a functional machine.
Click to expand...

22 is definitely older than mine. I have a 1937 model 450, currently for sale. Mine holds far better tolerance than I am capable of achieving. Old is not necessarily worn out.

Sent from my SM-G930T using Tapatalk