DIY wire saw designed to slice up a forklift

Have you ever wished you had a nice foot-thick cube of cast iron from which you could machine, say, an entire new lathe headstock? Or a 2ft long 4"x6" slab from which to machine a new cross slide? Or enough of it in convenient shapes that you could use to build up an entire CNC machine? If you have, then you probably found, like I did, that cast iron typically comes cast in shapes that were convenient for whoever cast them and what they were trying to make, and not so much for you to and what you're trying to make. You probably found out that lifting weights are junk iron, tractor ballast weights are made of gold, and durabar is actually made of platinum. You've probably watched a few casting videos, so you know it can be done, but it seems like a P.I.T.A. and there's nothing new or spectacular about it. If you're like me, then you have a junk forklift sitting in your driveway (that the scrap yard won't take because it's beyond their ability to scrap), and every day you walk by it and it flaunts its big beautiful cast counterweight hips at you, daring you to find a way to cut through a foot thick of cast iron. Well, I think I might have found it.

This particular janky P.O.S. happens to be a diamond wire saw. 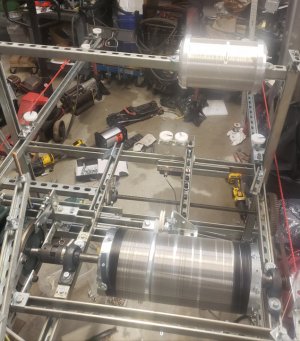 Yes, it's made entirely out of unistrut. Yes, it's janky as hell. It's prototype, ya know, "for testing purposes only." If it works as well as I hope, I'll make something more permanent. Maybe out of welded square tube. Or not.

I know some things about diamond wire cutting as I used to work with subsea diamond wire saws similar to this:


But this one is different. Those offshore ones use a continuous loop wire rope with sintered diamond beads, about 12mm OD. This one uses single-strand wire surplus from the semiconductor industry (used to slice silicon ingots with very little kerf) and has about 0.3mm OD. It is something like a "portable" version of this:


I won't be able to join the ends of 0.3mm steel wire without leaving some kind of knot that would get hung up in the cut, so I won't be able to do it like I used to offshore. I don't know for sure, but from what I've been able to find online, it seems they have it on spools with several miles of wire and I think they wind it off a full spool, through the cut, onto an empty spool, and swap the spools once all the wire has passed through. They can the run the same wire several times before it no longer makes cuts that pass their muster.

My saw is like a hybrid between the two concepts. It's laid out like a subsea saw, but has a single bobbin wound with 1000+ ft of wire. The bobbin spins one way, paying out wire from one end, going out around a system of pulleys like the subsea saw, then wound back onto the same bobbin. It runs until all 1000ft of wire has been moved from one end of the bobbin to the other, then it stops, reverses direction, and runs 1000ft the other way, then stop, repeat.

Here's a video I shot last week. It should help illustrate how it works and provide context for the video that follows it.


After I'm done cutting through the forklift I'll either hang it from the ceiling in my shop as some kind of haphazard guillotine saw, or transform it into something more permanent like a large bandsaw.

Here's an update to the previous video that I just uploaded tonight:


And below is an early attempt at balancing the drum. This thing will be spinning 2700 RPM so it needs to be at least somewhat balanced. I am going to revisit the balancing now that I have the saw mounted in a more substantial frame (as opposed to sitting on Jack stands) and now that I have legit analog-output accelerometers (as opposed to mechanically coupled computer speaker voice coils) to measure the vibrations.

Cool idea. Should be interesting to see that counter weight in pieces. Mike

FOMOGO said:
Cool idea. Should be interesting to see that counter weight in pieces. Mike
Click to expand...

I've been recording every step, I have every bit of footage from the beginning to now, but I didn't bother compiling any videos until now because I have bad track record with finishing projects. This one made it past the 90% milestone so it is definitely going to the finish line. I guarantee you will see sliced up counterweight or catastrophic failure, entertainment either way.

I agree that the diamond wire will act much differently than the fishing line..... in both places; more friction to the rollers and likely a much different coming off the spool. Likely less whipping/vibration due to stiffness.

Very interesting.
Thanks for sharing.

Interesting project, watching to see how this comes out. I had never heard of this cutting technique before.. Now I just need a junk forklift in my driveway to cut up...
C

Completely cool concept. It's like an Amazing Ginsu knife for forklifts!

Can't wait for the cutting to commence

I agree that the diamond wire will act much differently than the fishing line..... in both places; more friction to the rollers and likely a much different coming off the spool. Likely less whipping/vibration due to stiffness.

Very interesting.
Thanks for sharing.

Thanks. One thing I said in one of the first videos that you didn't gear because I haven't uploaded it yet, is that this isn't/wasn't supposed to be a bug complex build. It was supposed to be a big quick & dirty build, built for a purpose and then decommissioned. But the deeper I've gotten into it, the more my feelings have changed and I've given attention where I didn't originally intend to. If I had known the direction this would go at the start, there's a few things I would have done differently:

Stepper for the traverse lead screw. This was my original idea but I scrapped it in favor of the timing belt drive because that felt "simpler." In hindsight I could have done the electronics in less time than it took me to machine the timing pulleys, and it would have allowed me to dial in the lay length on the drum exactly, and keep track of the traverse position with more accuracy than my proximity sensors allow.

PLC for controlling the VFD. I opted to bring the sensors and buttons straight into the VFD and write a little "PLC" program in the VFD using a separate software for that purpose, and it works, but it is very limited. I'm about at the limit of what I can do inside the drive already, and there's a few more features I'd like to add but can't.

Welded steel construction. This project has used up every bit of my most common erector set accessories and if I ever want to build anything else I'll have to sink a thousand dollars into replenishing my cache, or completely re-do everything I've done in square tube. But, I sorta knew this would be the case, and it is "prototyping" after all; this is to be expected.

ConValSam said:
Completely cool concept. It's like an Amazing Ginsu knife for forklifts!

Can't wait for the cutting to commence
Click to expand...

I shouldn't say this out loud, but...

If this works in real life as well as it does in my head, this should produce cuts with a surface quality nearly as good as a roughing mill (maybe as good as a finishing mill, or possibly even a surface grinder), and as straight as a laser. Or at least as straight as a taut wire. It will be slow, slow, but what time is lost in cutting might be recouped in post-cut roughing. I could conceivably cut just almost up to final desired dimensions and then make only finishing passes on the "raw stock."

You can see what kind of surfaces this technology can yield by searching up "lapidary wire saw" and other similar search terms. Diamond wire sawing is used for some of those geodes you see with the polished flat cuts.

It is theoretically possible to achieve the results I described but it will depend on my ability to realize them with unistrut contraption off The Red Green Show.

I wonder if you might get better results in testing by using something like MIG welding wire instead if the stretchy fishing line.

johnnyc14 said:
I wonder if you might get better results in testing by using something like MIG welding wire instead if the stretchy fishing line.
Click to expand...

I thought about that and checked it out. MIG wire is much too large OD and too stiff to simulate the diamond wire. The diamond wire is 0.3mm (0.012") and my MIG wire is 3X larger at 0.035". I found some 0.3mm metallic "beading" wire in the craft section at Walmart but the longest length they had it in was 100 yds and I need at least 500yds continuous wire to run the saw. I could make some simple modifications to make it need less wire, but I didn't want to. I eventually decided to just put the actual diamond wire on it half way through my second video.
You must log in or register to reply here.
Share:
Facebook Twitter Reddit Pinterest Tumblr WhatsApp Email Share Link
It can take up to an hour for ads to appear on the page. See our code implementation guide for more details. If you already have Auto ad code on your pages there's no need to replace it with this code
Top
AdBlock Detected