How do you store your taps and dies?

I have come into a boatload of taps and dies. They aren’t in an organized box or anything. If you have a good method, please share some photos.....thanks!
M

All the tap and die sets I have bought are in their respective OE packaging. All the FIL taps from his work toolbox.......Cheap harbor freight storage bins. I think there is enough for a couple more generations lol

Using some 3/4 to 1" thick foam insulation panel pieces works well from keeping the tools from coming into contact with each other. Its relatively cheap and very easily adaptable and super easy to custom set each tools dedicated spot. How i did it in the past was to line the drawer with the foam then i gently heated the tap or die just enough to heat the metal enough to melt itself into a perfectly fitting secured holder spot.in the foam. ****Note on the longer taps and drill bits I inserted the bits into the foam at about a 45° angle to accommodate using a shallow depth drawer. I then pinned a printed/laminated list of each tool size next to each position along each row of cutters (in this actual case they were drill bits along with some tap and dies). Sorry i have no pictures as this was from long ago in another lifetime when i had more of a wood shop setup.

My sets are in the stock cases (have 5 or 6 of them), bulk extras are in their packing plastic tubes in bins by size (some loose ones in there too), and loose ones in a tool box drawer. Yeah, I admit to not separating them so they can't touch each other in drawers. I'm not driving down bumpy roads with them banging into each other. I'm probably wrong, but honestly if you set a tap next to another tap, will it actually dull? There will be responses saying "No, don't them them touch each other". But I'm more of a "prove it to me" type of guy.

My cynicism started after hearing a seminar by Amar Bose of Bose speakers around 30 years ago. He was a professor at MIT and required all of his grad students to check out the book "The Emperor's New Clothes" from the library. They were instructed to transpose the story, everywhere "clothes" was written, they substituted "audio equipment". Everywhere it mentioned the people or emperor, they wrote "audiophile". His point was an audiophile will say "Oh, this $2000 Nakamichi 500 receiver sounds far better than this $100 Panasonic 100 model". The Nakamichi only has 0.01% total harmonic distortion while the Panasonic 100 has 0.5% total harmonic distortion. Problem is, they are both being played through speakers with at best 15% distortion. The only way to "hear" the difference is with an oscilloscope, the human ear can not detect the difference because the weak link is the speaker. Of course, Bose was in the speaker business so consider the source. Listening to him changed my perspective on a lot of things and I now routinely question "conventional wisdom". Because someone says it doesn't make it true.

Anyway, has anyone actually taken a brand new 1/2"-13 tap and measured the torque to run a thread in a piece of 1/2" CRS. Bang the heck out of it next to another tap, then repeat and measure the torque again? If the tap dulls, seems like it would take more torque if it was beat up. I've not done the study, probably should and if it makes a difference I'd put my taps in that Chinese finger trap type of plastic to keep them separated.


Composite photo of a tool box drawer, loose taps/dies in the bottom one plus a small ACE set 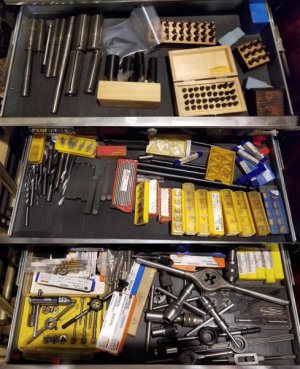 Another drawer (top composite photo) with a couple of sets (4-40 - 1/2 and Metric equivalent) stacked on each other. Some loose metric taps. 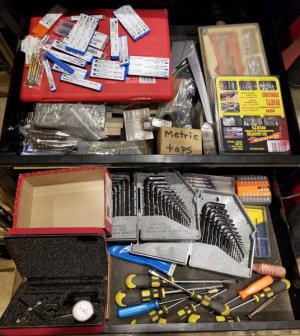 Drawer with the majority of my taps/dies. Most are in their factory packaging, but lots of loose ones touching each other also.
Also have a 35-year old Harbor Freight set of 1/4" NC/NF up to 1" NC/NF and an couple of equivalent Greenfield sets in boxes. The HF ones are actually decent! 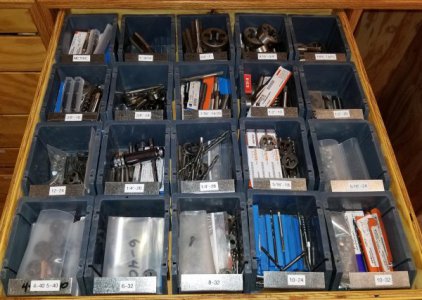 I’m considering one of these drill cabinets, has a total of 60 slots. I have so much stuff in my garage where I work on building my cars that putting in a lathe and mill along with the associated tooling etc has me trying to get it as organized as I can. Hence thinking about these cabinets....

Well, I can tell you what it is like at the other end of the totem pole. My Irwin sets are in nice tidy boxes, but all the rest are lumped together in some sort of loose organization (metric), small non-metric, large non-metric, and pipe), and held together inside Ziploc bags by aging rubber bands and then dumped into a cardboard box. Grampa’s are in a neat little antique pill box. Low humidity out here; never any rust or dulling as far as I can see, but I'm not vibrating the bunch of misfits by carrying them around in my truck either.

I use the Huots, although I still have a lot of taps in Altoids and other boxes that are duplicates.

Check out this page on Amazon

Funny that this just came up. I have one of those Vidmar cabinets, except mine is larger. Probably 32" wide. Filled with random stuff but I know where my stuff is! Payed $60 for it used.

Here is what I am currently working on. Who knows if my idea will work but basically I am building a master drill index. 1/16 -1/2, 1-60 and A-Z with room for more if I need it. We shall see how it turns out.. They don't call me the wood butcher for nothing.