My 1st engine - a simple wobbler

I’ve been thinking about doing a little model making lately and decided to take the plunge with one of Mr. Pete’s wobblers. Since this is my first one, I decided to give it to my grandson. Now, he’s way too young to appreciate a simple toy like this and since it doesn’t take batteries or have buttons I don’t think he’ll be too impressed by it. But, hopefully, in years to come, it will become a keepsake (if it survives that long) and he will think about his grandpa Ted when he looks at it (and maybe even runs it a little).

With the potential of becoming a keepsake I added some of my own twists on Mr. Pete’s original design. I put a lot more work and finishing into it than he did in his videos on making his. I gussied it up a little. I machined the connecting rod out of a solid piece instead of a two piece like his and put two tiny oil grooves in the piston because I read that this will not only help with lubrication but also act as quasi rings for aiding compression. Runs great! Runs nice and smooth at 2-3 psi and I don’t dare run it over ~8 psi for fear of self destruction. As he states in his video, you can email a fellow named Toly and he will send you a nice set of drawings for it.

I didn’t want to paint it since all surfaces were machined and/or ground on my surface grinder and looked very nice as finished. But, I knew that the steel parts would rust with handling so I bought a Testors paint set and painted those. Not the best paint job in the world; I’m not a very good painter.

It also gave me an opportunity to use a couple of the features on my new DRO for my Bridgeport. I used the circular hole pattern for the fly wheel and the radius function for rounding the top of the upright. Both did a nice job!

The last finishing touch was the piece of cherry for the base. I don’t do much wood working although my dad gave me all of his wood working tools and machines, so I do hope to get into that more in the future. 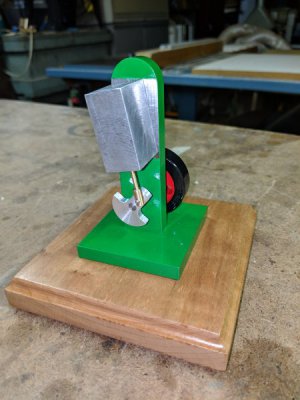 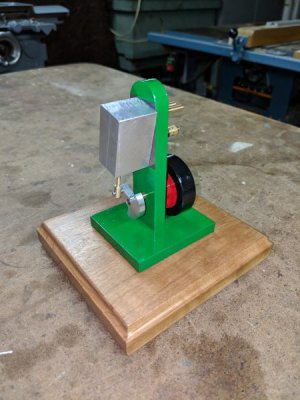 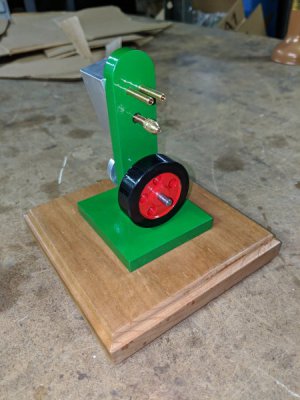 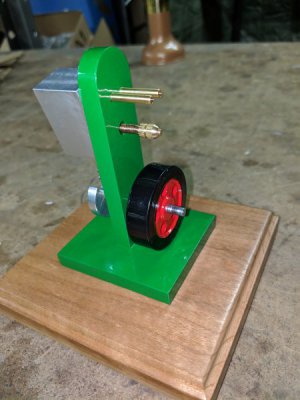 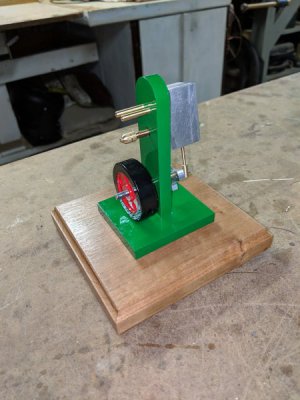 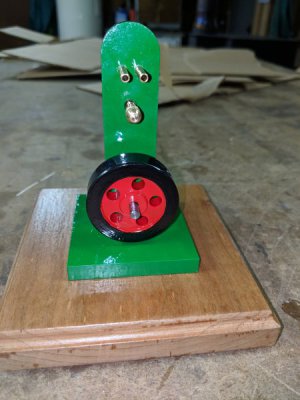 I like the color, if you had painted the flywheel yellow it would look like a John Deere

Hahaha, that's why I didn't paint it yellow! I said the same thing to my wife. After all, I've got a Kubota!

be true to your school
You must log in or register to reply here.
Share:
Facebook Twitter Reddit Pinterest Tumblr WhatsApp Email Link
It can take up to an hour for ads to appear on the page. See our code implementation guide for more details. If you already have Auto ad code on your pages there's no need to replace it with this code
Top
AdBlock Detected