Man that looks fantastic. Great job.
Hopefully, there is enough dust and dirt on the patio that it will most likely easily clean up. If not, get your wife a patio throw rug as a way to enhance the patio, maybe some new lounge furnature and she won't suspect a thing.

Thanks! She hasn't noticed yet so I think I'm good.

I'm gonna give it a runover with the pressure washer, hopefully the paint is just stuck tot he dirt and dust.

Put the engine back together and onto the base.


So now I've started tackling the hinge part, so much crud in this.
Washed every little part in degreaser with a toothbrush then rinsed and dried em.
The bearings has had fresh grease pressed through them to make sure every trace of old crud is gone.
Things actually got a quite a nice shine despite their age.


The main part has gotten stripped of everything that can be stripped. Need to clean out the grease fitting/route somehow and then a proper clean and repaint.
Last edited: Oct 2, 2020

Back at it! The parts got quite a bit of degreaser, lots of brushing and washing.
Didn't go as hard with sanding as I did on the base as I didn't feel it was needed, hopefully I don't get problems with the paint sticking to the old paint(roughed it up everywhere at least). 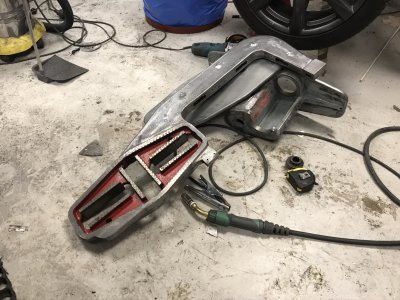 Started with these two parts and put on a pretty thick layer of epoxi primer, it's much easier to lay on thick than the paint ..
You can see the finish is a bit rough but there was plenty of material for me to sand it smooth to compensate for the rough castings. 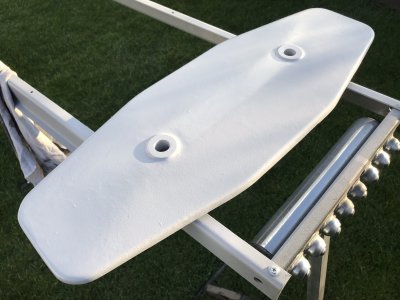 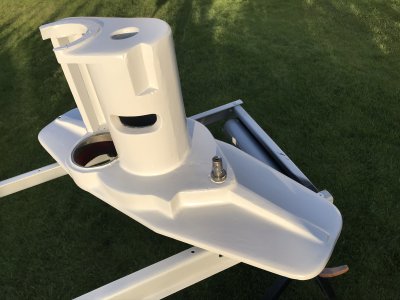 And I'm so glad I sanded it smooth, this came out amazingly nice..
There's a couple of dots but that's expected from painting outside.
Now I just gotta figure out a way to mix the right amount of paint..
The primer was barely enough and the paint was enough to paint these at least 4 times... 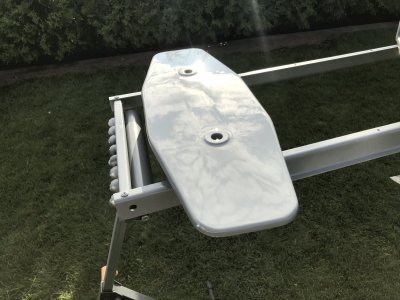 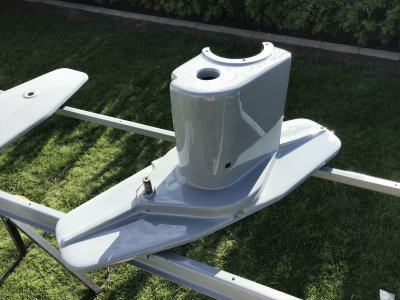 Was comparing some pictures ... 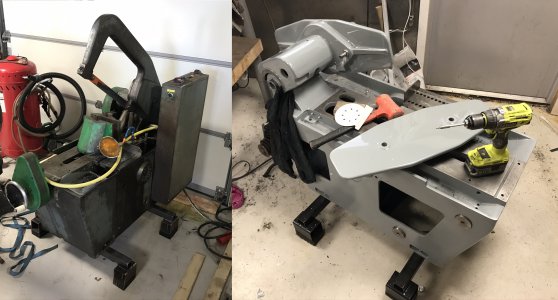 Realized I needed this little piece otherwise I can't mount the hinged part properly.
It was so rough cast that I felt the need to smooth things over.
Came out decently after some primer and paint. 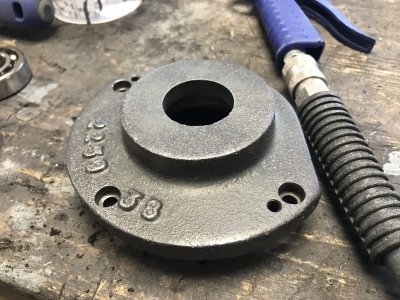 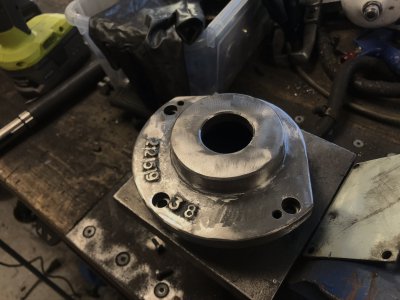 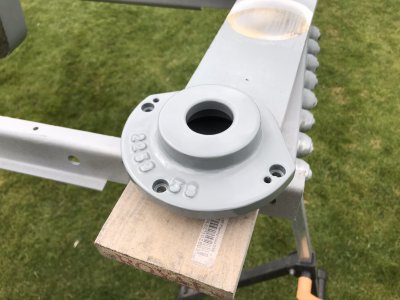 Also went over the saw bar or what it might be called, apparently the primer summoned the entire neighborhoods flies.

After some sanding and applying the polyurethane paint it came out really nice, just a tiny run on the front. 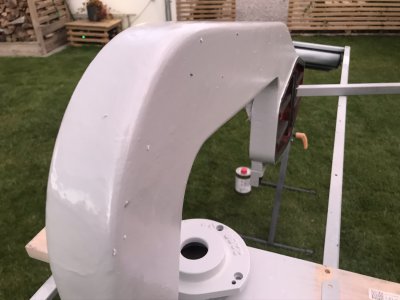 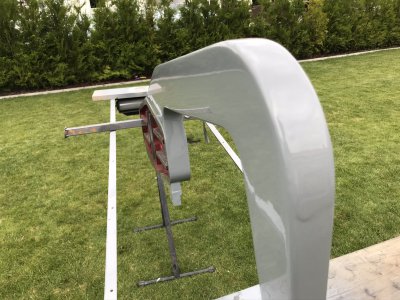 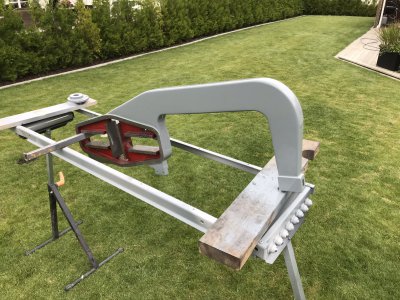 Kasto is a top quality saw....interesting they took over Racine....when I started out,I had a Racine Oilcut.....thing never worked properly ,I had to sit on the arm!......I wasnt even sure in the end that it was going the right way!........Bought a bandsaw.

I did use my saw a few times with a long bar to manually force the arm down, would not recommend...

Started putting some stuff back into the hinge.


This is next on the list, it's responsible for the reciprocating motion of the saw.
But first disassembly, cleanup and reassembly.


First 3 bearings(ball bearing, roller bearing and another thin ball bearing) came out away from the gear, somewhat easily once I ground the puller down to fit between the bearings..
I tried to get the big bearing off this way but I started feeling like something was going to break by the amount of force I was using so time for another approach.


I was quite scared of this but I pushed the shaft out of the gear, took around 10 metric tons until it started moving with a big bang, always terrifies me.
More worried about getting it back into place though.


Behind the gear I found a clip!
After removing this, I could somewhat easily press the bearings off the shaft, the opposite way of what I tried before.


It's quite a big wall preventing the bearings from going the other way, didn't realize this with the bearings in place.


This is the side where I removed the 3 first bearings. You can clearly see the non-concentric part here that I suspect pumps up the pressure to lower the saw. Need to verify when I reassemble.


So after a lot of work I have a bunch of nice parts that need some grease and hopefully less messy reassembly.
Last edited: Oct 2, 2020

Yes! Incredibly frustrating when you can't figure it out.

I was just going to quickly reassemble the shaft, but I should've known better.
After pressing on the last bearing, I tried to give it a spin ... It felt like the balls were hexagon shaped..
I spent probably 75 minutes trying to get the bearing off, getting angrier and taking worse and worse decisions before finally giving up.
As you can see I did damage the shaft a bit in my frustration, sad but it happens.

Coming back a few days later with a calmer head I broke the ballcages inside the bearing, moved all balls to one side and took the outer ring off.
This let me get some good measurements on the inner race.


Again, I was going to "quickly" mount the 4 jaw on the lathe to make a bearing puller. Brand new asian chuck, apparently the factory hadn't even properly tapped the treads in it so I had to start with modifying brand new parts.
I guess you get what you pay for, but still.


Starting off with a piece of scrap, regular hotrolled.


Gave it a facing pass and drilled a large hole before I started boring out to final size, leaving a small flange that would grip tightly onto the bearings inner race.
Before I cut them apart I drilled all the way through so I could thread it for M8, after cutting it apart I then drilled out one half to 8.5mm.
Two M8 bolts then clamp this onto the bearing race.


After spending like 3 hours on trying to get this bearing off, the success felt really good...
Again, everything is easier if you're calm and methodical about it, still trying to teach myself this...


With a new bearing pushed on, a bit more gently this time, it was time to assemble the rest.
Explanation of the bearings .. The two big bearings on the left mount against the big hinge casting so the entire shaft can spin.
The thinner bearing and the smallest bearing lets the steel socket rotate around the shaft itself.
Between the thin and small bearing you have a wider roller bearing which is mounted on the non-concentric part of the shaft.
The non-concentric part and it's roller bearing aligns with the hole in the steel socket, the piston will later connect here.
The piston is threaded into the steel socket but also has another shaft inside it, which goes against the non concentric part and somehow pumps up pressure to lower the saw arm.


On topic of being calm, I was about to have a seizure just getting this shaft back in....
No idea how it's supposed to be done, maybe taking the entire hinge casting off and using a press?
I spent 45 minutes with a rubber mallet, drenched in sweat by the time it was in.
Each hit, with all my strength, would move it a few thou..
There's no real access from anywhere else either. 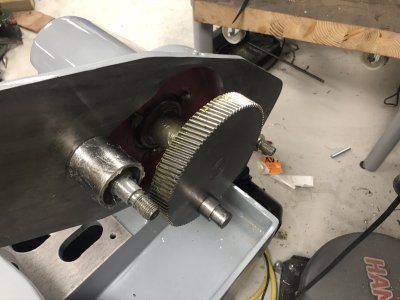 With the big gear in place, it was time for the small driveshaft.
It's just a long shaft, gear on one end and a slot for belt pulley on the other end.
This one slid into place real pretty easy. 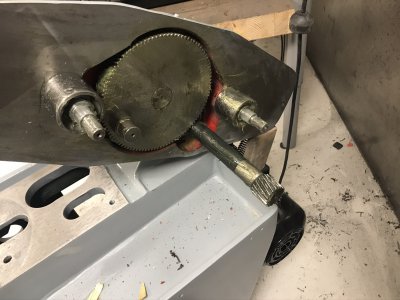 The shiny shaft extending on the left is the place for the belt pulley. 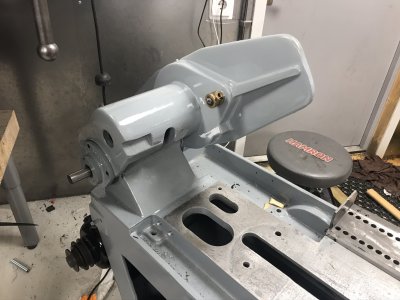 Inside the hinge casting, you can see the previously mentioned steel socket with the thread for the piston that will later lower the saw arm. 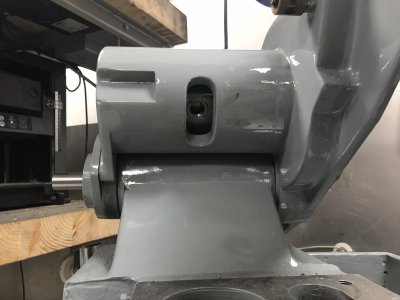 Just an overview photo. Next piece to go on would be the saw arm itself and the endpiece.
But before I mount those big and heavy pieces I want to install both the hydraulic piston and a second piston that I think only consists of a very large spring.
Having these to help the hinge stay up will greatly help with remounting the saw arm. 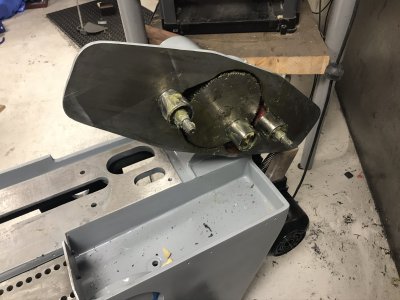 Hopefully I'm not posting too many pictures, I just find that they tell so much more than my words.


MrCrankyface said:
Hopefully I'm not posting too many pictures
Click to expand...

There's no such thing!


MrCrankyface said:
No idea how it's supposed to be done, maybe taking the entire hinge casting off and using a press?
I spent 45 minutes with a rubber mallet, drenched in sweat by the time it was in.
Each hit, with all my strength, would move it a few thou..
Click to expand...

Could a large c-clamp have been used against the end of the shaft and the housing. With a soft pad to protect your paint job.

Well, I might have reason to try that out very soon, found out that I did a boo-boo.
Pressing the shaft back into the gear, I didn't think about orientation.
The yellow circle is the part that drives the saw arm back and forth. The upper red arrow is the non-concentric part of the shaft.
I am FAIRLY sure this ~90 degree shift from how it was is going to cause issues... Every day is a learning day.

Note: Old pictures, shaft is still in the machine. This is why taking pictures is so valueable.


The largest clamps I have, that might have the slightest chance strengthwise of doing this job, are too small at 500mm/20" BUT you gave me a hopefully great idea Brino.
I have some really beefy angle iron in my stockpile that I should be able to build a fixture(if that's the word for it) around the casting, to both let me press the assembly in and pull it out.
Sure it's some extra work but I would probably "have to" play with my mill to make it!

But first I'm going to struggle on with assembling the piston that raises and lowers the saw, once that's in and working I can get a better idea of how it's cutting cycle works, so I understand exactly how that pin wants to sit relative to the non-concentric part.
Last edited: Oct 2, 2020
You must log in or register to reply here.
Share:
Facebook Twitter Reddit Pinterest Tumblr WhatsApp Email Share Link
It can take up to an hour for ads to appear on the page. See our code implementation guide for more details. If you already have Auto ad code on your pages there's no need to replace it with this code
Top