I recently added a Ditron D80 DRO to the Takisawa lathe. It's a good featured DRO, a nice display, miniature scales, etc. I like it, but in checking its accuracy (not a completely trivial task, as far as I can see) it's off about 3 thousandths in 3 inches. So, trying the linear compensation feature, which does not work anything like what's in the manual, I can compensate it to either 3 thousandths over size or 3 thousandths undersize...can't hit it on the nose.

It feels like there is some quantization in the math that is blocking me...anybody here have this unit and tried the linear compensation? If so, how did you do?

I have tried both imperial and metric units, same result exactly, just the same equivalent error plus or minus.

Dropros, who I got it from, admits they do not know how this works either. They've offered an upgrade to another type DRO, but I like the readability of this unit. I hope I can keep it.

I believe the problem may be the resolution of the scale, and if this is on the cross slide in diameter mode. A 5 micron scale will increment in jumps of 0.0004" in diameter mode and this limits the steps depending on the linear compensation increment of how it is applied, so the error adjustment if off is multiplied by the linear compensation increments. So I would expect that the correction applied is limited by the scale resolution setting. The long axis would increment in 0.0002" with a 5 micron scale. A few things you may try, it may have something to do with the measured length and how the error calculation is performed/applied, so maybe see what happens if you apply the error compensation over the full length of travel vs. say 1" if that makes any difference, but I still believe you may have an issue with how the correction is applied for the scale resolution.

Humm...you could be right here, mksj. An excellent thought. I’ll try the longer travel distance for calibration.
I don’t believe there is a 1 micron scale in the mini size, though the D80 can be set to that resolution.
W

Just for the record, mksj has made some valuable private message comments, facts and suggestions, and I am in pursuit of resolution with the manufacturers and vendors.

Following.
Just ordered a Ditron D80 and DMS 1um magnetic scales from Ditron direct the other day. Excellent sales service. Not sure about after sales yet though.
Have you asked them? Abigail was her name at sales7@dcoee.com.
Excited to try my DRO.

Sent from my SM-N960F using Tapatalk

Winegrower said:
I like it, but in checking its accuracy (not a completely trivial task, as far as I can see) it's off about 3 thousandths in 3 inches.
Click to expand...

Are you using gage blocks and a DTI to check physical movement vs the DRO readings? I ask because I tried a couple of other approaches and never got real good readings. Finally, using gage blocks, the readings came within 0.0005" of each other over 4" of travel.

I also made the mistake of trying to get the DRO to line up with dial readings. Big mistake there too.

My DRO is not the same as yours, but does have the linear and non-linear compensation functions. My manual specifies calculating a factor which is essentially the percentage difference between the readings, and entering that value along with the appropriate + or - sign.

Curious to hear what you find out!

I have a D80 new in box sitting on my mill that's not going to get installed right away. I'm definitely interested in how it works out for you!
W

I have been slow to get back on this problem, but here's where I am:

1) Todd at DRO has been as helpful as could be, but has not seen the problem I describe. He has sent a replacement scale to try...have not done that yet pending some new insight that I need.

3) I find that things look normal most of the time, and over long distances the DRO reading correlates with actual travel very well. However over certain even short distances, as short as 0.030", there can be an error of about 0.003". I tried very hard to capture a record of this, logging all the data. Do you know how many 0.0001's there are in 4 inches? I got to where I had narrowed down the error, thought I had it all captured, and decided to blow any chips off the scale. Huh, problem changed, would not repeat. Without redoing the entire experiment, the particular error I was after went away, but the issue still exists in places, random places.

4) I am thinking that this is not a linear or non-linear compensation problem, as the DRO reads correctly over long distances, and I also don't think this is a scale resolution issue, though it's clear that a one micron scale would be superior.

5) I don't think there's any basic issue with the D80 DRO. I like it, it's easy to use (except compensation) and easy to read.

6) So I am suspicious about the ability of the magnetic scales to resist small ferrous chip contamination, mainly based on the change when I blew off the scale.

I am attaching two pictures, in hopes that someone here will suggest something great:

7) The first picture is the scale and reader installed on the tailstock of the carriage, which is attractive with these smaller scales as you don't lose much tailstock quill travel. I installed the scales "vertically", I would call it. You can see that it somewhat exposes the scale to chip collection, I suppose.

8) The next picture is of the scale with a magnetic "developer" held against it. This just shows the large scale magnetic patterns. There are two tracks, one at short spacing and one at much larger distance between transitions or zones. The reader has a green light that shows red when it's over the larger distance zone, by the way.

I know this is hard to read, and I apologize. It is simply reflective of how confused I actually am. I hope that someone here might really truly understand and be able to explain what is actually recorded on the scale, how the reader interprets that, and if it is possible that ferrous material could give a transient error. The error always seems to show a smaller than actual distance, by the way.

If contamination by magnetic material is the issue, then I could see some possible solutions:
1) Relocate the scale elsewhere.
2) Cover the scale better.
3) Give up and go to glass.

The difficulty with just relocation is that it seems like eventually there will be some collection of particles, so maybe not really a solution.

Anyway, I solicit your thoughts and opinions. Thanks. 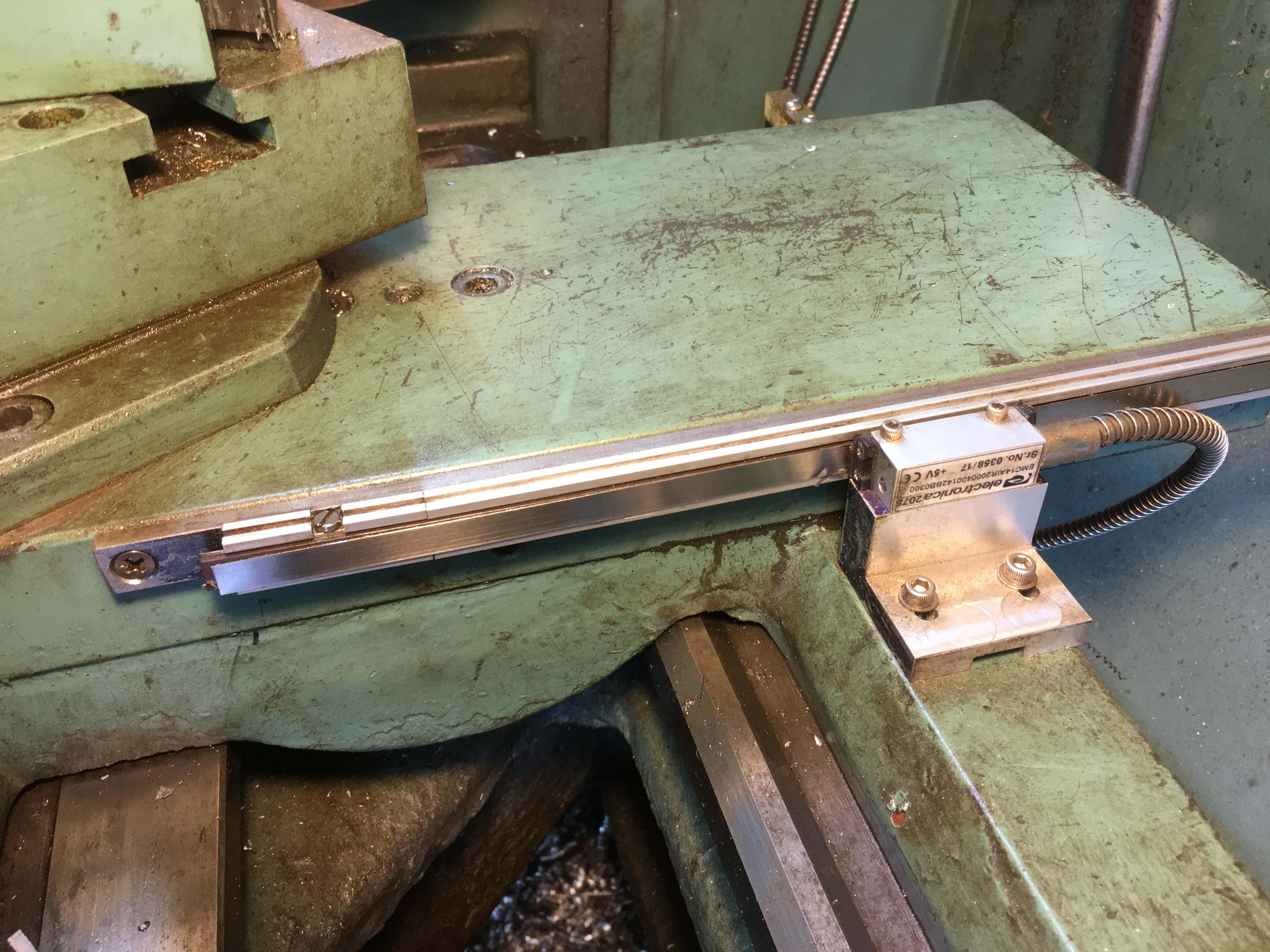 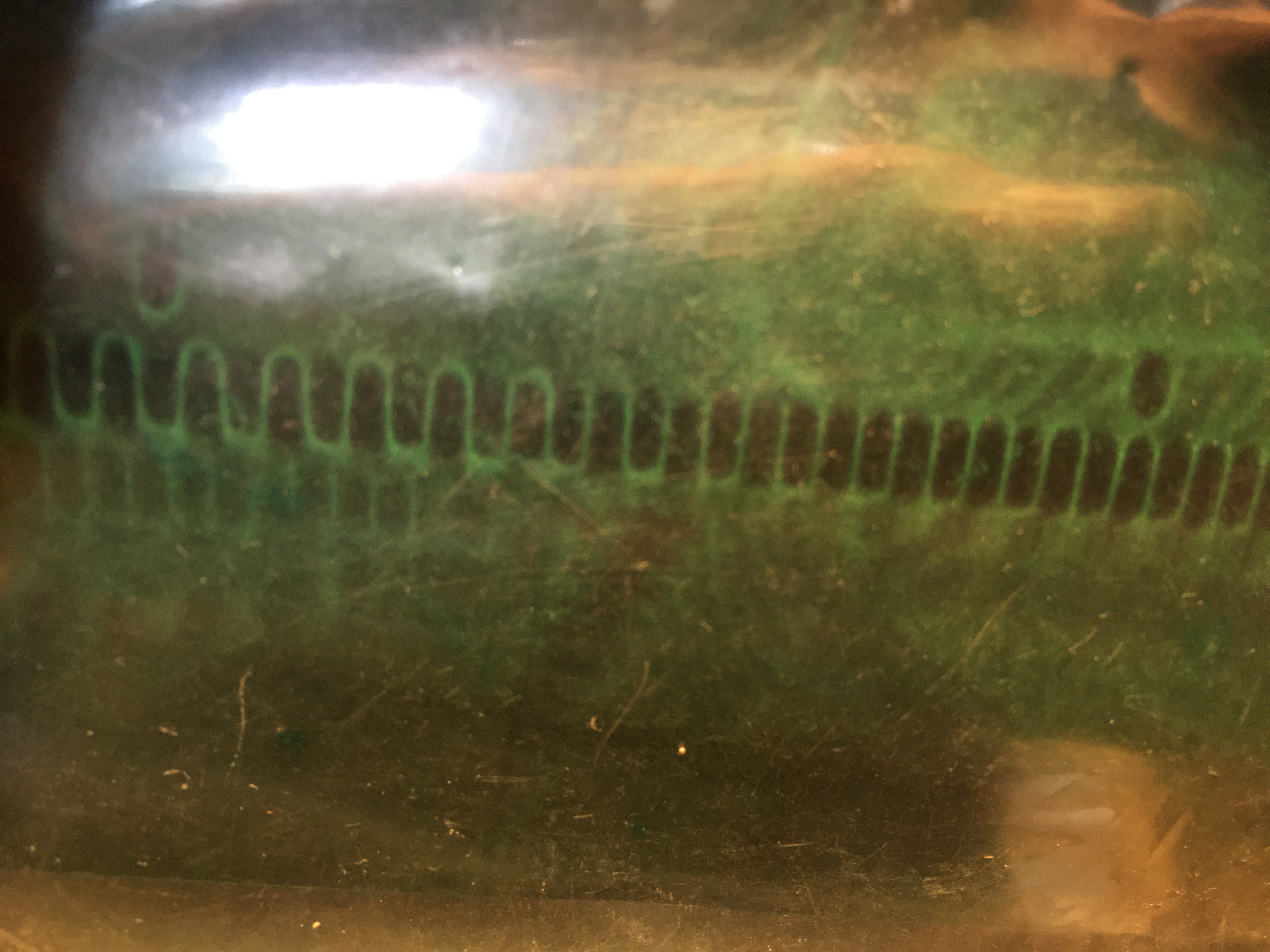 I think your installation looks fine. It would be ideal to have a cover, but I suppose that would mean having to lower the whole installation so you could affix an aluminum angle to the table or to the scale mount.

I wonder if you might be losing accuracy and repeatability by trying to measure the x-axis travel using a dial indicator. I have always thought that DI's and DTI's are great for measuring relative distances, but not so much absolutes. Plus you may be introducing some error by repositioning the indicator every time it reaches its end of travel.

Also, your dials may not be a very good measure of travel either. Wear in the screws and nuts can skew the readings.

You might try measuring travel by using a 4" gage block and a DTI. Here is one way to do it:
This method assures that you are measuring against a standard 4".

Bill70j, thank you for that. I agree with your points, and indeed I considered a cover as you suggested, but it would have to go over the reader, and so add to interference with the tailstock. Your method is good, and is more or less similar to some tests I did where I concluded, as you say, that over a long distance, the DRO reads correctly. I previously tested all my dial indicators, digital and analog, and basically found they were all plus or minus 0.001", so you're right on. The dial on the Takisawa is pretty good, but yep, 0.001 would be pushing it.

My question is, is there a failure mechanism with magnetic scales that debris can cause temporary and localized errors? That is the closest summary of my problem that I can give at this point.
You must log in or register to reply here.
Share:
Facebook Twitter Reddit Pinterest Tumblr WhatsApp Email Share Link
It can take up to an hour for ads to appear on the page. See our code implementation guide for more details. If you already have Auto ad code on your pages there's no need to replace it with this code
Top
AdBlock Detected