POTD- PROJECT OF THE DAY: What Did You Make In Your Shop Today?

Easy does it... holes on the base done... and started to do the rest. As suggested, leaving part of it the way it was and machining the rest... 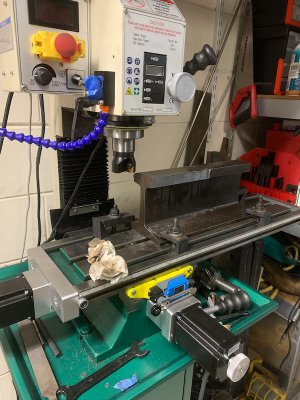 I was quickly reminded that I have a small milling machine... easy does it. But did I take it easy??? Nooooo!!! Blew a fuse... the machine, not me... Another lesson learned... let it cool, take it easy...

And heading out to Virginia in the morning... so more on this on Wednesday...

Looks like nice progress. I would have a perverse sense of satisfaction from blowing the fuse.

Today i spent few hours working on my friend's niva, this it the one i welded in the seats more then year ago. Its not starting and it's been towed from shop to shop for more than 3 months. No one could figure it closes one come it needs complete ecu and wiring loom but that is more expensive then what its worth. So after testing all the basics and doing lots of wiring loom repairs the ECU come out and found the problem. Water has gotten in and shorted the circuit board. It needs an ecu, but its not as simple as others vehicles it has an immobiliser and it's a separate box made by the russians and needs special programer that no one seems to have. The original ecu is not responding at all, i plan to sent off the original ecu to get fixed. There is a way to cut the wire from the immobiliser box but the ecu has a runtime check and it will lock it self in some time. 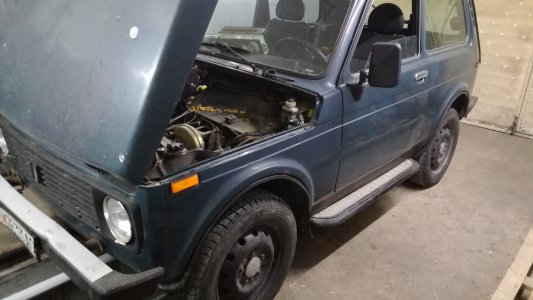 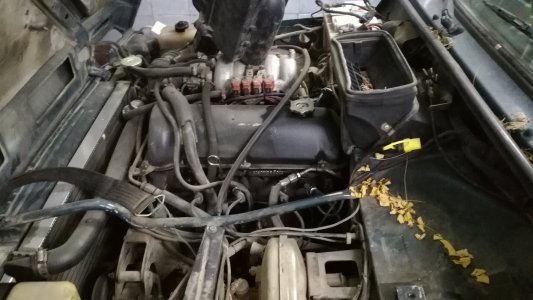 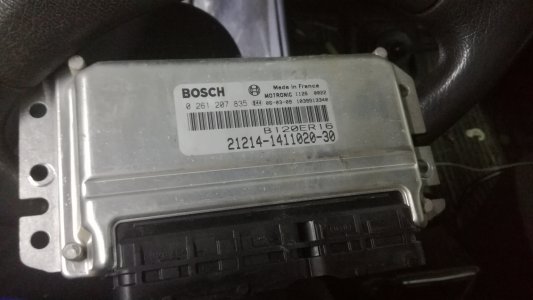 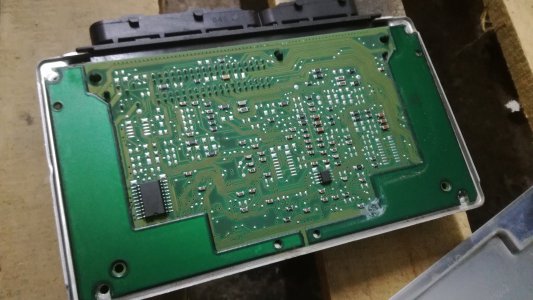 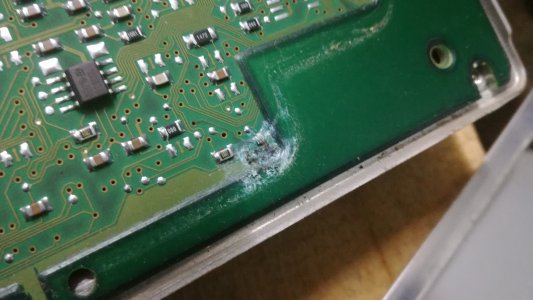 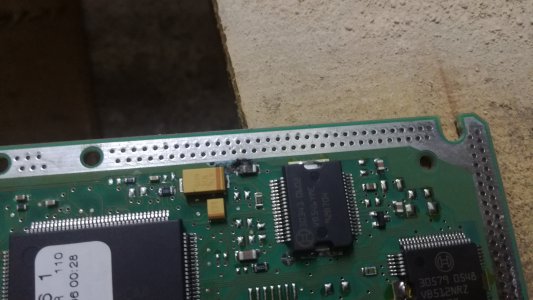 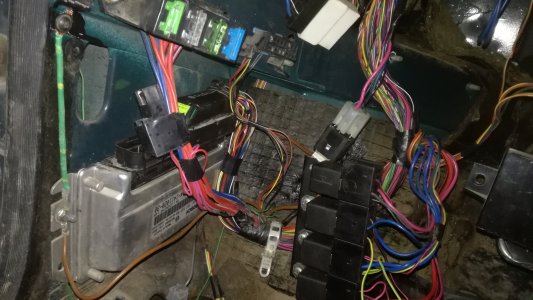 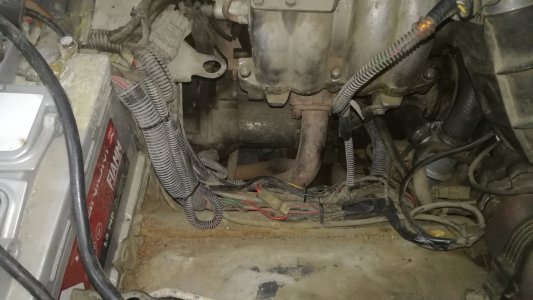 Today’s little adventure was coming up with one of these. A pin puller (pusher? driver? extractor? gizmo?…) to get a tiny split pin out of the rear end of a 1961 Elna Supermatic. 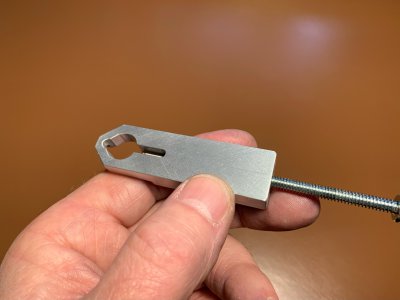 There are a few machine designs that made use of a rubber friction wheel or friction “pulley” as it’s often called to transfer power from the motor to the sewing mechanism and the Elna was one of them. Trouble is, as the machines age and especially if they site unused for great lengths of time (ie: years), the rubber can develop a flat spot where it rests against the hand wheel. It doesn’t kill the machine, it can still sew, but it makes a rather disconcerting thump-thump-thump-thump-thump as you step on the gas. Kind of like those minus 35 degree mornings when the tires on my Dad’s big Buick got rolling for the first time. So gotta replace the friction wheel. 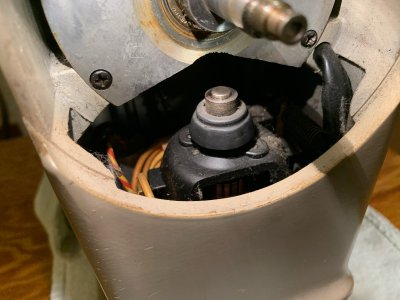 Of course it’s not real easy to get at and everything is small. I measured the split pin as best I could at about 0.090” and built from there. I’d seen someone else’s version of a similar design in use and thought it was pretty clever so I used that as my starting point. There’s nothing really special about the actual machining — I just used a scrap of 6061, a #10-24 machine screw, and a 5/64” drill bit in the end as the pusher. 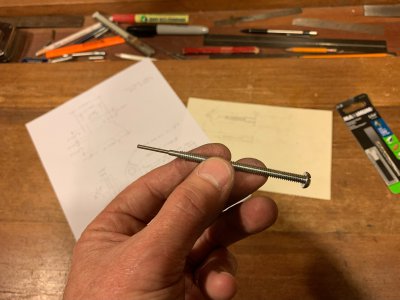 And it worked great! With hardly more than finger pressure the split pin started easing out the other side until it was completely clear and I could lift the pulley. That is until it ran into the aluminum casting right above it! Grrrr! This is kind of like those car stories where you have to drop the whole motor to change the oil filter but that’s exactly what I had to do — flip the machine over, take off the belly pan, disengage the speed control linkage and drop the motor by an eighth of an inch. Goofy. 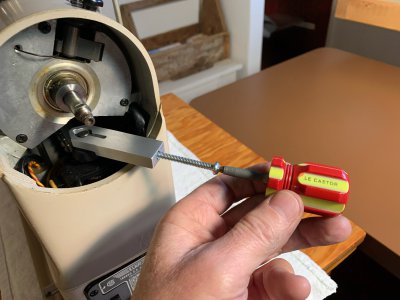 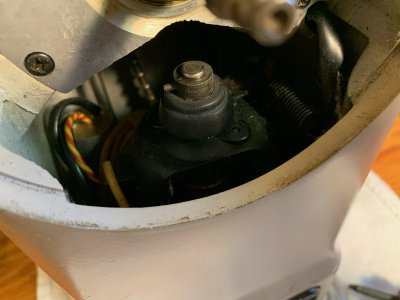 Anyway, it worked and it got the pulley off. You should be able to see the flat spot just between my fingers. Coming up with a new one will be for another day. Replacements can be had although I’ve heard the quality can be a little spotty not to mention kind of expensive. I’m going to try casting my own out of some Shore A60 silicone and see what happens. 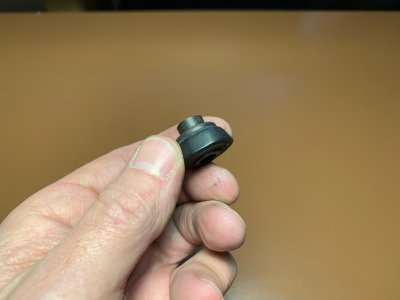 francist said:
I’m going to try casting my own out of some Shore A60 silicone and see what happens.
Click to expand...

That would be something I'd like to see.
Another tool in the bag of tricks if it works!
-brino

Good to see this post Francist
My partner has a few Elna supermatic's a 51, a 56, 2 of the 64 models and a 75 model so interesting to see this about the friction drive pulley .
I may be going down that maintenance path myself someday. cheers

I make little metal out of big metal.

I bought this ball joint press kit from my used tool dealer last week. I got it for a song because the previous owner cut a notch in the non threaded end of the c vise.
I welded it up, leaving plenty of extra metal to grind and blend the repair. The inside almost got cut to size with an air grinder and carbide burr, but I decided that I could do better than my boss at work would want me to do (good enough).
Besides, it gave me an excuse to use my 90* head, my coaxial indicator, and my boring head.
It came out pretty good, and the repair is not somewhere that will weaken the press. 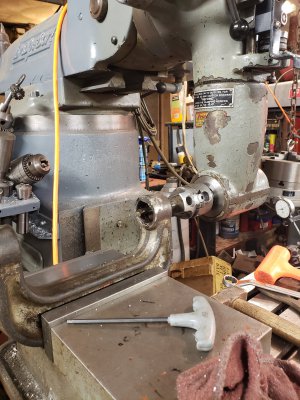 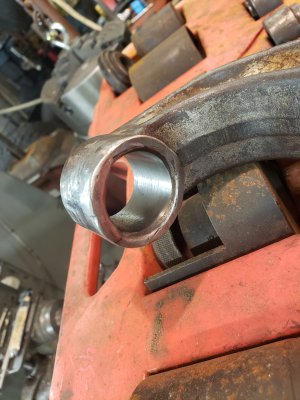 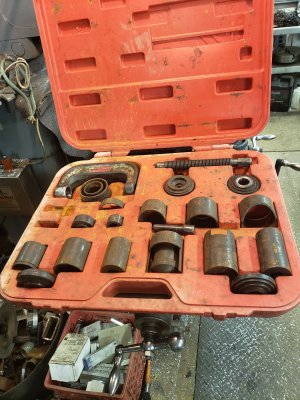 I make little metal out of big metal.

Thanks, and yes, it can really save your tail feathers.

More time in the shop today and I knocked this out in a couple hours. 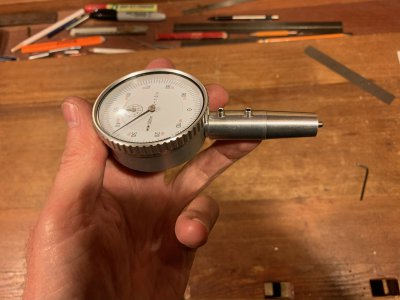 Huh, looks like a cheap dial indicator, what’s the big deal? Well it is a cheap dial indicator, in fact I kind of pooched it a few weeks ago when I severely over-travelled it and it’s been lying on the bench ever since. More recently though I’ve developed the need to make a replacement part out of a hard rubber material, and while I have a product I’m going to use I won’t really know if it will be dense enough until after I’ve made it. It would be nice, I thought, to have a way to measure the hardness of my old part and thereby be able to compare that to other known samples. In other words, a durometer. Hmmmm….


Without getting overly involved here’s the breakdown: regular 1” drop indicator with removable tip. I unscrewed the tip, fitted a small washer to shoulder against the tip but not slide up the stem, then slid a fairly close fitting compression spring over the stem and screwed the tip back on. A normal indicator has this spring action built in — this is what causes the stem to return after a measurement — but that’s the part I wrecked on mine and plus, I wanted a much stiffer spring action. 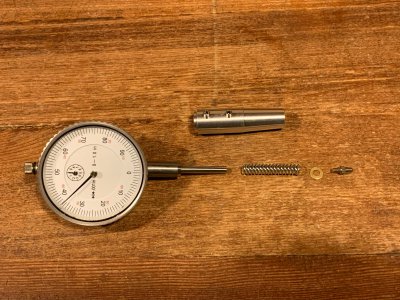 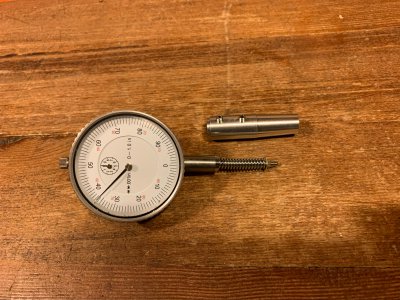 The big aluminum part is essentially just a sleeve drilled and reamed to fit snugly on the barrel of the indicator. It’s open on the end, the spring-loaded stem is free to slide inside the sleeve, and the tip extends beyond the end of the sleeve by about an eight of an inch or so. The sleeve is held on to the barrel with two small grub screws so it can be adjusted a little if necessary. 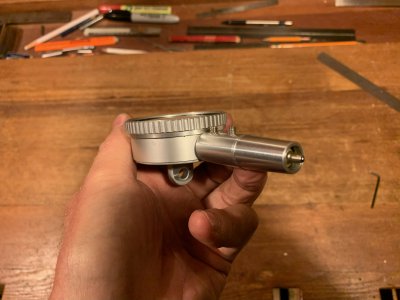 How does it work? Well, you press the tip against the test material until the sleeve comes in contact and note the measurement. A “soft” material will allow the tip to sink further in and not depress the spindle very much against the spring. But a harder material will not yield as much so the spindle will be depressed much further giving a higher number. Here’s two examples: the pink sample is 30 Shore A and quite squishy; the green sample is 40 Shore A and more of a medium softness. The actual numbers on the indicator won’t correlate to any actual Shore hardness values (unless I’ve been unbelievably lucky!) but they do provide a relative comparison which is what we’re after a lot of the time anyway. 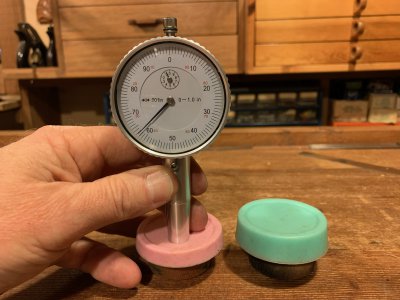 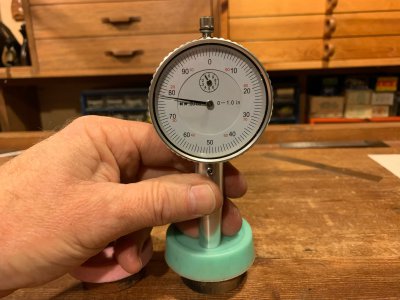 In all likelihood this may be one those “…it seemed like a good idea at the time…” projects that you really never use but it fun just the same. Thanks for looking, again.

-frank
You must log in or register to reply here.
Share:
Facebook Twitter Reddit Pinterest Tumblr WhatsApp Email Share Link
It can take up to an hour for ads to appear on the page. See our code implementation guide for more details. If you already have Auto ad code on your pages there's no need to replace it with this code
Top
AdBlock Detected