Inspired by @vtcnc and others, I've decided to make my next project a benchtop gear hobber! I opted to buy from Martin Models (see my thread here: https://www.hobby-machinist.com/threads/visited-martin-models-today.101648/ for my trip report), which seems like a nice revision of the standard kit with some nice looking options/changes.

Also, it comes with some plans that are seemingly not too bad quality wise. There is some work to be done to track down some of the dimensions, but the first few parts seem like they aren't too confusing. I plan to work 'bottom up' like I usually do, to try to 'use up' castings and bolt them together as soon as possible

Castings seem like they are really high quality and generously sized: 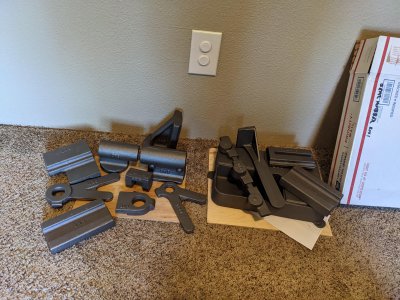 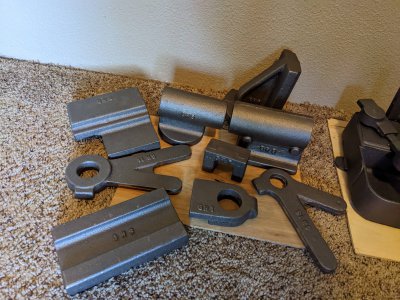 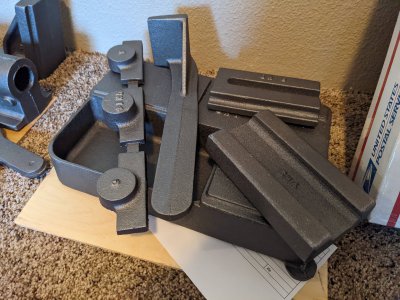 And here they are (well, most of them...) arranged more or less how they will end up when assembled, useful for my visualization purposes 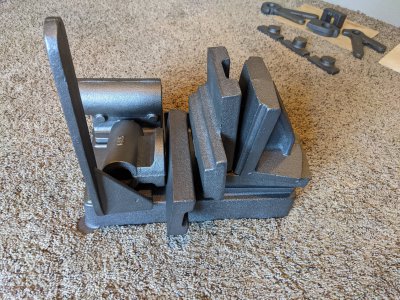 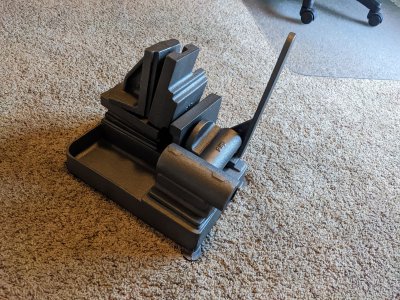 I don't know how many I times I did this with my set of castings. Just sat there visualizing and then my wife catching me zoning out in my head thinking the project through. These photos made me chuckle.

Looking forward to your build. You aren't far behind me and I anticipate you will pull ahead soon. I won't be getting back to mine for a little bit yet.

So I spent yesterday evening going over the plans as best I could, without some level of instruction or an assembly diagram, it is pretty confusing, and I think I found a few dimensions that are either confusing, or incorrect. It also does an annoying job of mixing radius and diameter in a few places. I got a feeling there are a few pieces missing from the drawings, so I think I'll have to engineer a couple as I go along.

One thing I'm particularly confused about is the dial mounts section of the feed screws, which doesn't really make sense/add up to me. BUT thats a problem for a later-date, and I can engineer something when I get there.

One thing I DID notice, is it is designed with an NMTB20 tool-holder for both the work holder spindle and the hobber holder spindle. I cannot for the life of me find a half-decent source of those, so I might find myself replacing those with something like MT2 along the way.

All that said, this looks like it'll be a fun kit to work on!

THAT SAID, I studied the base plate, and the 3 pieces that connect to it directly, and am pretty confident I know enough to get that done correct, AND understand what are the important dimensions/locations.

I started by filing casting marks off the base and hobber-spindle-housing I wanted to start by flattening the base, but need to get a very heavy vice off the shaper, so I can do it over there first

I started by facing the bottom flat, which is going to allow me to setup the important reference surfaces: 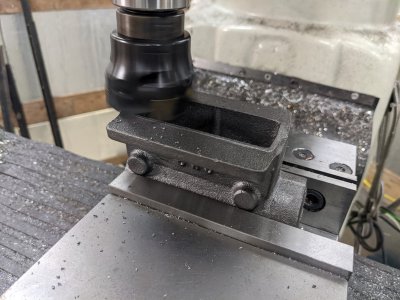 I ended up adding packing there a little later.


Next, I had to find the 'center line' best I could, which I did with a wiggler and by eye: 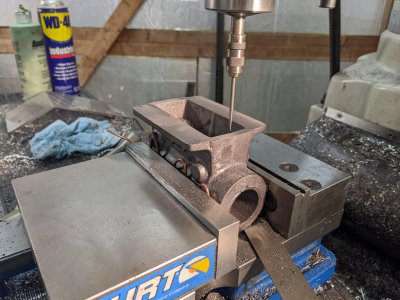 Next, I need 'zero' face on this side (the gear/drive pulley side) to base some other measurements off of. the sticking out part of the cylinder will have the quadrant arms on it, so that boss needs to be turned to this face. Also, this is the 'zero' for alignment with the "EL" bracket that holds the other part of the gear train. 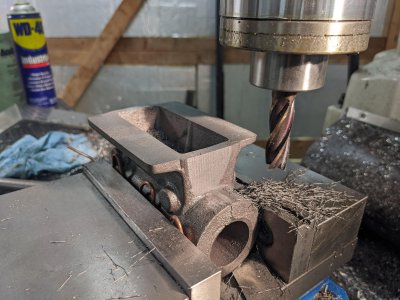 Next, I squared up the sides, based on my 'center' point, so that the flanges are the same size on each side. This will be useful as indexing surfaces in the future I believe. 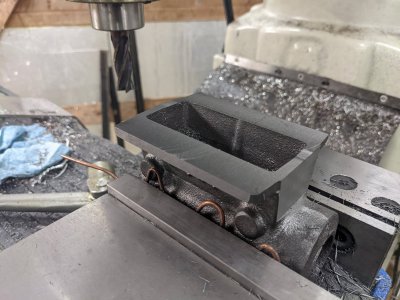 The plans call for a key-stock alignment pin, so I cut a 1/8x1/16 slot down the center. This should make sure this stays square to the other components on the base. 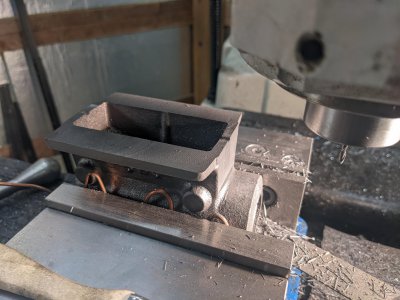 FINALLY, I flipped it up on its back side with a parallel against the indexing face I made earlier, and flattened the 'hob' side. This needs to be flat because I'm going to use it to index in the 4 jaw chuck later on when I start cutting the bores. ALSO of importance, the area around the bore has a bolt-pattern that I'll have to cut at one point or another, so this being flat will be handy then. 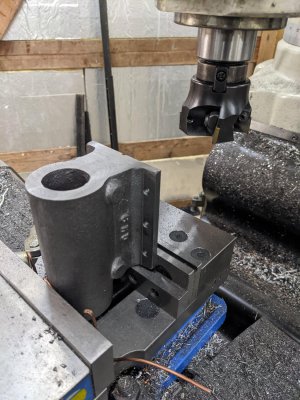 That was it for today! I'm probably going to hold off on the bore until I get the bearings I need delivered, so my next step is probably doing the shaping on the base, then the milling necessary there (like drilling all mounting holes/etc), and then probably the 'EL' gear holder.
E

Decided to spend another 90 minutes working after dinner. I got the vise off my shaper table, and got the base strapped down. The plans say the three pads need to be parallel and flat, but not coplanar.

It also says not to machine the bottom of the feet. Since I'm doing the top of this in 2 operations (it needs time on the mill as well), I think I'm going to try to get these all coplanar so I can mill the feet coplanar as well, then use them when strapping it down to mill the mount holes and alignment holes.

I got about 1/4 of the way through the shaping work, using a shear tool I ground tonight. The finish is gorgeous and very flat, despite the appearance and a large step over.

After my first two passes: 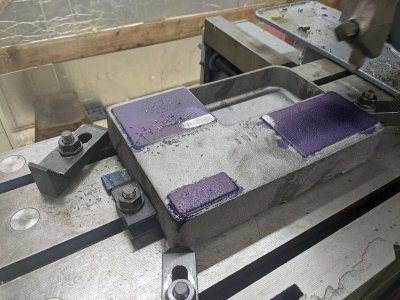 The shear tool in action: 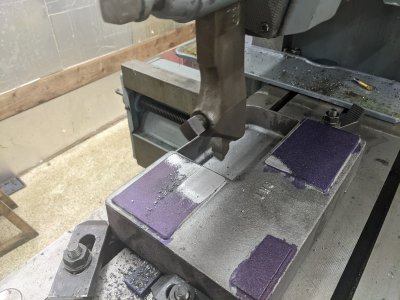 And finally, where I gave up at the end of the night: 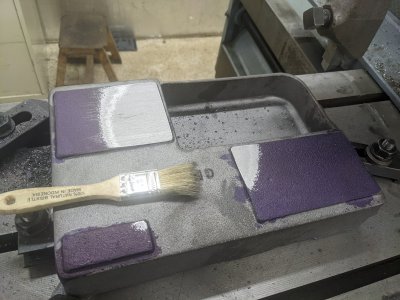 The top left pad there is higher than the others by quite a bit, and the whole thing is high in the center, so it might require taking quite a bit of material to get coplanar.

So, what will you use for hobs? I still have some, gear and thread, mostly in good condition. For me they make good paper weights.
Aaron
E

AGCB97 said:
So, what will you use for hobs? I still have some, gear and thread, mostly in good condition. For me they make good paper weights.
Aaron
Click to expand...

Its pretty flexible on hobs, I just have to turn a new hob-holder each time. At the moment, I haven't gotten that far, but I'm intending to see what is available on ebay when the time comes.
E

More progress today! I had 3 machines running at a time for a while, so I went back and forth quite a bit. But, I finished flattening the base on the shaper with the shear tool. There was a pretty serious crest in the casting, so I found myself cutting into the part number a bit. Not sure if I will grind that off before painting. 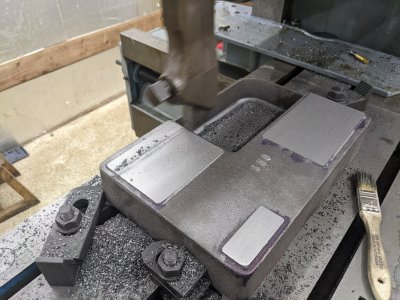 On the mill, I worked on the "EL", which is a part that holds part of the gear set. Most of the dimensions are not critical, just that the outside face needs to be flat and square to the base. Everything else can be taken up by a quadrant arm and washers in between the gears. I started by trying to flatten the main face: 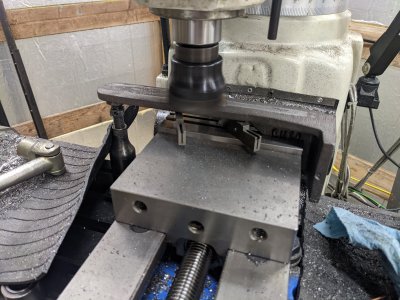 This went bad, I got chatter like no one's business on that far end. I opted instead to go a different path. By thinning out the riser, I could make the sides of that my reference surface (and, get it a little nicer looking). 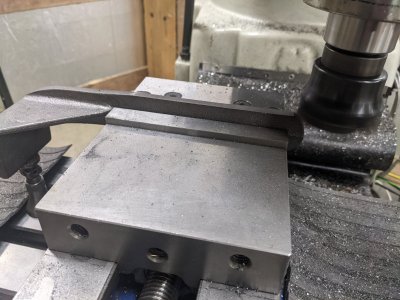 Once I had the first face done, I was able to flip it over on a parallel and get the other side easily enough! 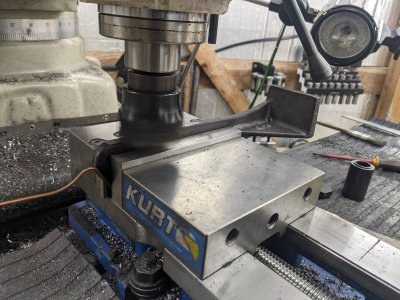 From there, I could squeeze those faces in the vise and have a basically fully supported for 90 percent of the way. I had to use a small shim to keep up the hanging side to stop chatter, but operation success! 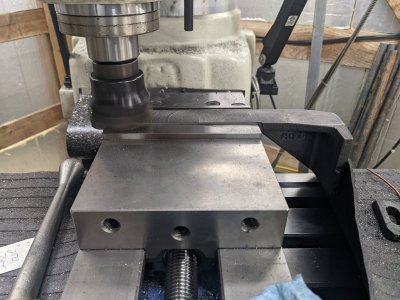 At this point I could have used the big endmill to do the base, but I was afraid of the overhang. Instead I opted to do the rest of the operations on my fixture plate with a big endmill: 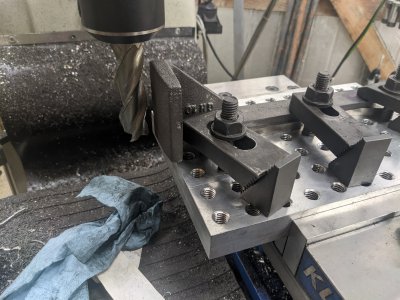 I drilled the end holes smaller, then used a 1/2" endmill to mill the slot: 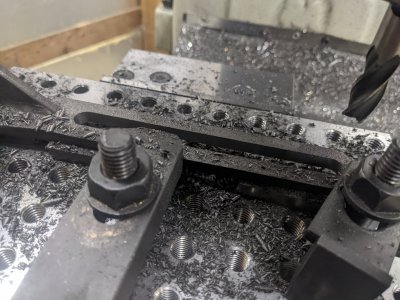 For my last milling operation, I need to essentially spot face down the part. I opted to just machine it all the way down, swapping clamps as I went, but the last overhang ended up a little thin on one side thanks to some lift feom the endmill.

After that, just mounting holes! The distance from face to the bottom hole is the only really relevant dimension, so I laid it flat and used a height gauge to measure.

I used a hand drill to drill them, figuring I can upsize it if necessary/too inaccurate. 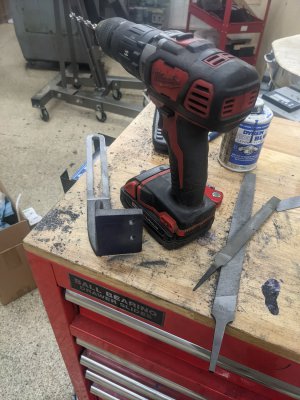 I wasn't confident I could do that in the mill (I need a horizontal mill I guess!), So this worked out fine enough.

Tomorrow if I get shop time, I plan on finishing the base by drilling all the mounting holes.

Been looking at this kit for a few years now.
You must log in or register to reply here.
Share:
Facebook Twitter Reddit Pinterest Tumblr WhatsApp Email Share Link
It can take up to an hour for ads to appear on the page. See our code implementation guide for more details. If you already have Auto ad code on your pages there's no need to replace it with this code
Top